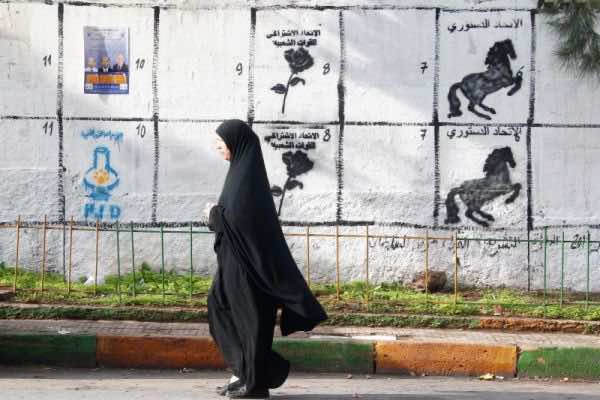 As polls open on Friday for parliamentary elections in the Kingdom of Morocco, the inhabitants of Sidi Moumen, one of the poorest neighborhoods of Casablanca, say they have lost all faith in politics.

Casablanca may be the economic capital of Morocco, but far from the touristy shoreline toward the east lies one of the poorest neighborhoods of the city, Sidi Moumen. Nestled a stone’s throw from the squalor of the slums, its central market attracts mostly women, who shuffle past vegetable carts, butcher’s tables and colorful stalls brimming with spices.

As the country readies itself to hold parliamentary elections, the vibrant hues of the women’s head scarves and products betray the downcast mood of the shoppers.

Only a few election posters plastered on walls recall the imminent vote, which was called by King Mohammed VI as part of constitutional reforms that gained overwhelming approval in a referendum last July.

The move by the sovereign might have been of historic proportions, but Sidi Moumen’s residents, most of whom live below the poverty line, feel disillusioned. Despite some efforts by authorities to modernize the neighborhood, people here expect nothing from the government.

“I will not vote Friday, I can only count on myself to secure the future of my children. Everything else doesn’t interest me,” says Moutay, a heavily bearded banana vendor. The owner of the nearby vegetable stall nods in agreement. “The candidates all look alike, they think only of getting rich on the backs of the poor,” Moutay adds.

This is also the opinion of Mohamed, a young vendor of fabrics, who says he has given up on Morocco’s ruling class. “As usual, the politicians suddenly pay attention to us before the elections. Once it’s over, they disappear as fast as lightning.”

After failing to pass his secondary school final exam, Mohamed came here from the central city of Marrakesh to carve out a meagre living. He and his parents depend on his average monthly income of 1,000 dirhams (about €100).

“It will not change my life”

Earlier this week, thousands participated in a protest march in Casablanca, organised by the February 20 movement (a group made up of youth, leftist radicals and Islamists who denounce corruption and are calling for deeper political reform), and called for a boycott of the parliamentary poll.

The 21-year-old will not vote on Friday, even though he considers casting a ballot his “civic duty”. The reason is that he is registered to vote in his native Marrakesh and will not make the long journey to cast his ballot there.

Idriss, an orange vendor in his fifties, says he will definitely vote for the Islamist Justice and Development Party (PJD). With 47 members of parliament, the PJD is the country’s largest opposition party. “I usually vote for them, for moral reasons and because my family also votes for them,” Idriss said. “I think they are the only ones who are not corrupt.”

Aisha, a 40-year-old widow, hurries around the maze of the market. Hidden under a plum-colored veil, she says that since the death of her husband she is the sole provider for her children. “I’ll vote on Friday, because it is a right and a duty. But I’m not fooled, [the election results] will not change my life.”

As the majority of her countrymen, Aisha is loyal to King Mohamed VI. “I know that our King, God save him, is trying to help the poorest and I voted for his new constitution. It’s the people directly below him who take advantage of their position to make more money,” she says.