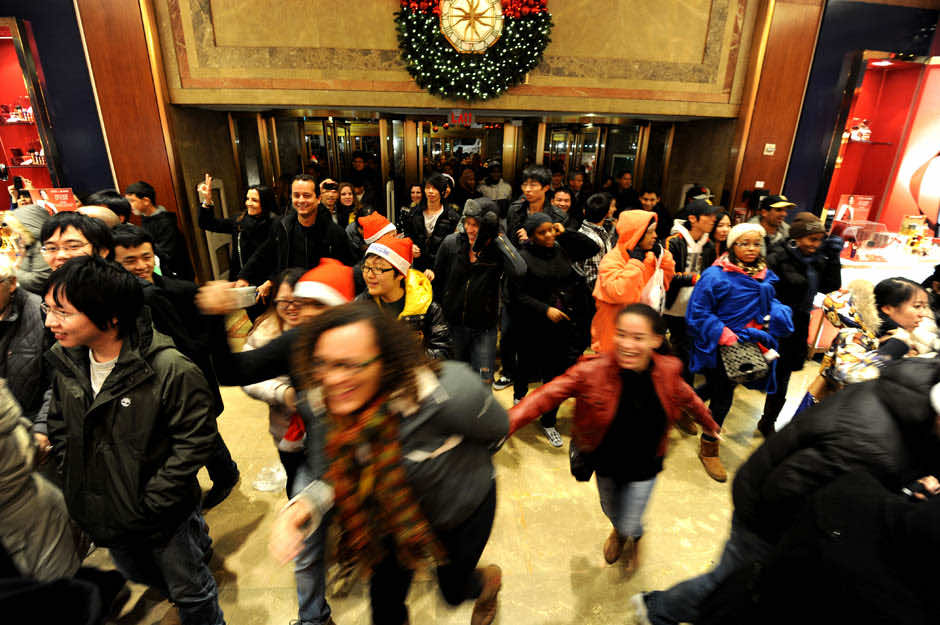 Big crowds on Black Friday can be both a blessing and a curse.

Early signs point to bigger crowds at the nation’s malls and stores as retailers like Target and Macy’s opened their doors at midnight on the most anticipated shopping day of the year and a few others opened on Thanksgiving Day. Shoppers were mostly peaceful across the country, but a few violent incidents broke out as millions of shoppers rushed into stores and tensions flared.

It started on Thanksgiving, when Los Angeles authorities say 20 people at a local Walmart store suffered minor injuries when a woman used pepper spray to gain a “competitive” shopping advantage shortly after the store opened.

Then, early Friday in Fayetteville, N.C., gunfire erupted at Cross Creek Mall and police say they’re looking for the two suspects involved. Separately, police say two women have been injured and a man charged after a fight broke out at an upstate New York Walmart. And a central Florida man is behind bars after a fight broke out at a jewelry counter in Walmart in Kissimmee, Fla.

Later Friday morning, a Phoenix television station KSAZ reported that witnesses say police slammed a grandfather in a Walmart in Buckeye, Ariz., to the ground after he allegedly put a game in his waistband so that he could lift his grandson out of the crowd.

The incidents are the result of two converging trends on Black Friday. The crowds continue to get bigger as retailers offer more incentives and longer hours. At the same time, shoppers are competing for a small group of products, instead of years past when there were several hot items from which they could choose.

Indeed, a record number of shoppers are expected to head out to stores across the country this weekend to take advantage of discounts of up to 70 percent. For three days starting on Black Friday, 152 million people are expected shop, up about 10 percent from last year, according to the National Retail Federation.

“I came here for the deals,” said Sidiki Traore, 59, from Roosevelt Island, N.Y. who was among about 10,000 people who were standing outside of Macy’s store in New York’s Herald Square for its midnight opening.

The crowds are good news for retailers, many of which depend on the busy holiday shopping season for up to 40 percent of their annual revenue. To draw in shoppers this year, they pulled out of their bag of tricks. In addition to several retailers opening much earlier than previous years, some began offering to match the prices of competitors and rolling out layaway programs.

Shoppers on Friday, though, say they mostly are being lured into stores by the deals, including discounts of 20 to 60 percent on many items at The Gap and a $400 Asus Transformer 10-inch tablet computer for $249.99 at Best Buy.

After showing up at Best Buy in New York on Wednesday at 3 p.m., Emmanuel Merced, 27, and his brother were the first in line when it opened. On their list was a Sharp 42-inch TV for $199, a PlayStation 3 console with games for $199.99 and wireless headphones for $30. Merced says he likes camping out for Black Friday and he figures he saved 50 percent.

To be sure, not every store was filled to the brim with people looking for deals on Black Friday. With so many major stores opening at midnight, crowds shopped early, staying up late to snag the best deals. That meant there was an unusual lull during the typically bustling pre-dawn hours when stores used to open their doors.

At a Target on Chicago’s north side, for instance, crowds were light four hours after the store opened. And door-buster deals, including the typically quick-to-sell out TVs and gaming systems, remained piled up in their boxes. Shoppers pushed carts through mostly empty aisles while thumbing through circulars and employees – some in Santa hats – roamed the store. There was no Christmas music — or any music — playing.

Rebecca Carter, a graduate assistant, began Black Friday shopping at 11 p.m. on Thursday night and left Target around 4 a.m. carrying a bag full of pillows. Carter, who prowls Black Friday deals every year, said crowds were noticeably lighter this year as she and a friend picked up a television set ($180 for a 32-inch TV) and a laptop for $198, along with toys and pajamas.

“It’s quiet,” she says. “There were all these televisions still there. It was shocking.”

It was the first year that Melody Snyder, 34 of Vancouver, Wash. had ventured out for Black Friday. She had braced herself for crowds and mayhem when she got to Walmart at 6 a.m. but was pleasantly surprised when she pulled in the parking lot. She found a number of gifts for her three kids but said she did find the store was sold out of a few of the big sale items, including certain Barbies and other toys she’d considered.

“It was a little intimidating,” she said. “Then I got here and thought ‘Where is everyone?'”

David Bassuk, managing director of retail at AlixPartners, a consultancy, says retailers are going to have to do a lot of discounting during the holiday shopping season to keep customers coming back.

“Consumers have made it clear that they’re only going to spend so much money, and the people who are going to get them to open their wallet first are going to win,” he says. “This is a consumer who is smart and well informed but also cash-strapped and cautious.”