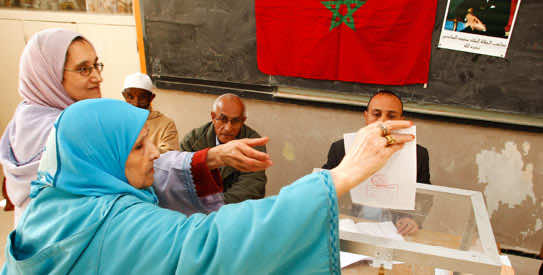 In his first statement two hours after the closing of polling stations, Morocco’ Interior Minister, Taieb Cherkaoui, said that voter turnout in  today’s elections reached about 45% at national level, according to information available now.

In a press briefing held in Rabat, Mr. Cherkaoui explained that the elections took place “in a normal context, under a climate of mobilization and a sense of responsibility,” noting that the results election will be announced tomorrow.

Among the three favorites, the PJD is the only political party that has never participated in  any government. The Istiqlal party, which won the 2007 elections, has participated in every government since the independence of Morocco in 1956.

31 parties were competing for the 395 seats in the lower house of parliament, 70 more than during the last election in 2007.

These polls were overseen by 4,000 observers representing international and national bodies.