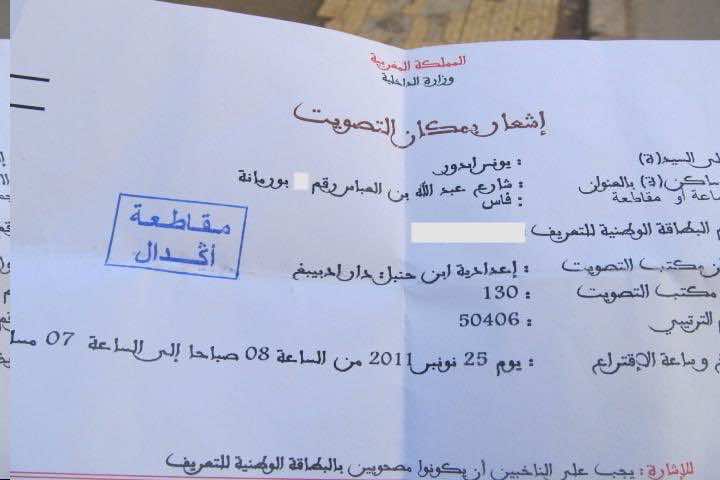 I have read an article entitled “Why I will Not Vote on November 25?” by Jamal Labiad, published by Morocco World News on November 24. I fundamentally disagree with it, here is why: boycotting the elections is just losing the opportunity that Moroccans receive every five years to express themselves and choose their representatives to Parliament. I do agree, however, that the majority of the parties do not deserve to serve the country and they are corrupt, etc. but we should give a chance to others whom we relatively “trust.” I think voting is (more than) a duty as Moroccan citizens.

Labiad believes that “Nothing has been changed as far as the measures Moroccan political parties rely on in order to choose the candidates that will represent them around Morocco.” It will never change if we boycott the elections. Certainly not the whole population will boycott, and many will go to vote. This means that still the government will rely on the votes of those who voted.

Elabiad argues that many candidates use bribes and “false promises” that manage to win over poor and illiterate subjects. In my opinion, if the literate and intellectual people go to vote, rather than boycotting, they will be more likely to make change. If “money … is a key factor for a candidate to win the elections in Morocco” then our vote is the key factor to decide if this candidate will win or not.

I have recently read in the newspaper that there is now a box set-up by the Parliament where Moroccans can go and post their complaints or suggestions. The claim that “the Ministry of Interior in Morocco is known for its role in rigging election results” would more likely be heard if it’s shared. We should change what we think is corrupt rather than just complaining that it is such.

I voted and I completed my duty as a citizen who calls for change!

Youness Abeddour is a Moroccan graduate student in Cultural Studies at Sidi Mohamed Ben Abdellah University, Fez – Morocco. He obtained his Bachelor’s degree in English Studies having completed a thesis on The Presence of the Mellah in Morocco, 2009.