Rabat - Every passing hour brings its share of good news to Morocco’s Party of Justice and Development. After the primary provisional results pointing to the victory of the PJD in many big urban areas in Morocco, such as Casablanca, Rabat, Fez, Marrakech, Tangier and Tetouan, to name a few, the big win hoped for by the PJD over the years is about to become true. 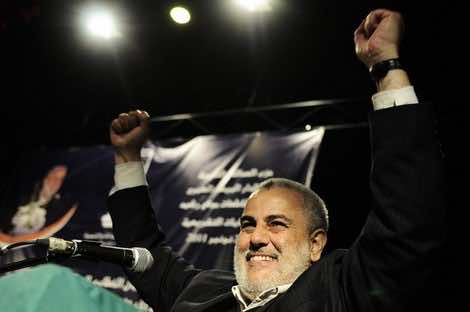 Rabat – Every passing hour brings its share of good news to Morocco’s Party of Justice and Development. After the primary provisional results pointing to the victory of the PJD in many big urban areas in Morocco, such as Casablanca, Rabat, Fez, Marrakech, Tangier and Tetouan, to name a few, the big win hoped for by the PJD over the years is about to become true.

Based on the information received by the PJD leadership from a number of polling stations, the Islamist party is believed to have won 80 seats, without counting the seats for the national list reserved for women and young people.

In a declaration to the press later on Friday, Abdelilah Benkirane, Secretary General of the PJD said that “Based on the information that we have received so far, we are set to exceed our expectations. I think we are on course to obtain between 90 and 100 seats »

Analysts expect the PJD to exceed 90 seats, which will allow it to head the incoming government, in accordance with provisions of the new constitution adopted last July.

In a phone call with Al Jazeera, Mustpaha Ramid, member of the political bureau of the PJD, said that the provisional results point to the victory of his party, adding that the latter is poised to win and will be “reckoned with the test of heading the government.” He went on to say that his party will form a coalition with other parties, adding that it is preparing its program with the view to heading the incoming government.

Government officials still did not confirm the PJD’s announced results.

In the 2007 elections the PJD came in second as it obtained 47 seats, while the first place went to the Istiqlal party, which won 52 seats.

In a briefing with the press after the closing of polling stations, Morocco’ Interior Minister, Taieb Cherkaoui, said that voter turnout in today’s elections reached about 45% at the national level, according to the latest available information.

“Moroccans can be delighted at the 45% turnout, compared to the 37% registered in the 2007 polls,” Naciri said, noting, however, that “more efforts should be made by political parties so that the process leads to a genuine democratic society fulfilling aspirations for reform and democracy.”

Failure of the G-8 coalition to galvanize voters

Despite its efforts to thwart the PJD’s effort to win its first elections, the eight-party coalition led by the outgoing Minister of Economy and Finance, Slahedine Mezouar, showed the limits of its dwindling popularity among voters. In fact, most Moroccans have long lost faith in these parties, which have been running the country for decades and have failed to put Morocco on the right path towards progress, prosperity and a fairer distribution of the country’s wealth.

While some Moroccans rejected the prospects that the PJD lead the new government, arguing that they cannot be trusted to take control of the country’s destiny at this juncture, others are of the view that this party is the only formation likely to put Morocco on the right direction and break with many decades of corruption and nepotism.

“We may demonize Islamist Parties, and presume they cannot be trusted to govern democratically, but the fact of the matter is they won the elections in a democratic fashion. Since they played by the book, it would be hypocritical to deny them that right”, said Faouzi Talby, a Moroccan who live in Las Vegas, in the United States, in a comment on Morocco World News fan page.