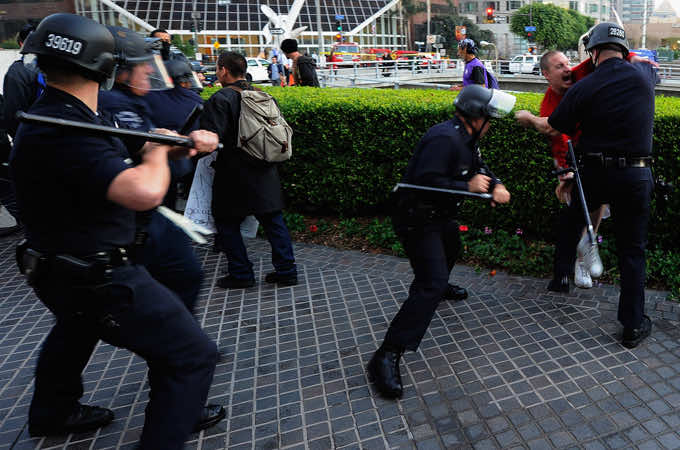 Mayor sets deadline for protesters to leave, saying they have “awakened country’s conscience” but damaged the grass.

Activists at the Occupy Los Angeles protest say they will refuse to leave after the city’s mayor said they were violating health and safety laws and damaging lawns, and therefore needed to abandon the encampment by Monday.

Mayor Antonio Villaraigosa, who had previously expressed sympathy for the Occupy movement, told the protesters on Saturday that they had “awakened the country’s conscience”, but said that the trampled grass outside City Hall, the site of their two-month demonstration, needed to be restored.

At a press conference with Charlie Beck, the head of the city’s police department, Villaraigosa said protesters had until 12:01am on Monday to leave the site.

“The movement is at a crossroads,” said Villaraigosa. “It is time for Occupy LA to move from holding a particular patch of park land to spreading the message of economic justice and signing more people up for the push to restore the balance to American society.”

He said that the LA camp of about 485 tents was unsustainable because public health and safety could not be maintained, and the park had to be cleared, cleaned and restored for the public’s access, he said.

The justification used by Villaraigosa to shut down the camp was the same as has been used in numerous other US cities, including New York and Oakland, where municipal officials said that for health and safety reasons, people had to be physically removed and arrested.

Protesters in those cities have contended that while their camps may not adhere to local health and safety codes, that using physical force including tear gas and pepper spray were both unhealthy and unsafe.

Outside City Hall, Occupy LA protester Opamago Casciani, 20, said he found the Mayor’s priorities insulting and intended to continue demonstrating through the deadline.

In response to the Mayor’s comments, Casciani said: “What I got from it is: `I value grass more than the people’.”

Immediately after the mayor announced the deadline, protester Jeremy Rothe-Kushel who was in the audience among a group of reporters, interrupted him, shouting that the group would not obey the order.

“As a collective, Occupy Los Angeles would like to express their rejection of the city of Los Angeles’ alleged proposal that we leave City Hall,” said Rothe-Kushel, who interrupted both Villaraigosa and Beck throughout the news conference.

The group issued a statement on Thursday expressing the same sentiment.

Villaraigosa said that in hopes of keeping the peace, social workers would begin walking through the camp offering help to protesters, and 50 shelter beds would be made available for campers who are homeless, and special parking set aside to facilitate the exit.

“Fifty beds? There are at least 300 of us,” said Casciani. “I personally plan to stay and stand my ground.”

Villaraigosa added that City Hall’s Spring Street steps, a traditional protest site, would remain open during the park restoration so Occupy LA or any other group could exercise free speech rights.

Beck said police would be patient with laggards who were still packing belongings and working to leave at the time of the deadline, but said the city’s law enforcement would no longer look the other way.

“After 56 days of not enforcing three city laws that prohibit the use of that park, the time is now,” said Beck.

Protester Stephanie Lopez, 18, who has been living at City Hall Park since October 2, when there were only a handful of tents, also said she planned to stay through the deadline.

“It’s a complete offense to us, this grass isn’t even good for the environment,” said Lopez.

If the movement has to move, Lopez said she hoped occupiers would take over an abandoned building somewhere else in the centre of the city, as has happened in other cities such as New York and Oakland.