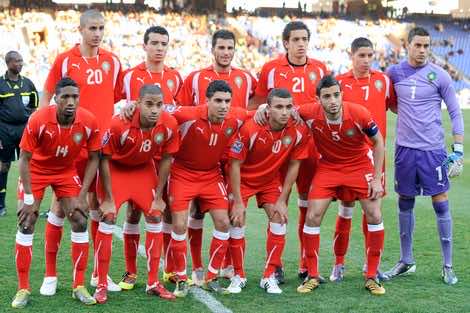 The first ever CAF in U-23 Championship gets underway on Saturday 26th November in Tangiers, Morocco with Nigeria taking on hosts Morocco in group A. The other two teams in the group , Algeria and Senegal clash after the opener at the same venue, Grand Stade de Tangiers.

Moroccan coach Pim Verbeek was non-committal about his charges’ prospects in the opening match choosing to talk of the tough encounter ahead of his team.   “¨We did not get positive results from our preparation match against Senegal and l would like us to play better”  said the Dutch coach. We have pressure to deal with ahead of this match and Nigeria is q good side so l am hopeful we can turn it round and perform well on Saturday. ” said Verbeek.

The Moroccan coach lamented the failure to have a full squad at his disposal but admitted this was a problem faced by all teams at this tournament, “Yes of course the European based players would have been an added advantage and given me more options but l will have to make do with the squad l have.” I would like us to absorb the pressure and huge expectations on us and settle into football we are capable of playing. If we can strike this balance l am sure we the passionate support we have here in Tangiers we can have a great tournament but its all about handling the pressure in the right way. ” said Verbeek.

Nigeria’s Uder-23 coach Austin Eguavoen was also playing down his team’s chances of victory and pointed to added pressure on his team to succeed due to an unusual underperformance by Nigeria teams at major competitions recently.

“Yes were are under pressure and as coach I’m under a lot of  pressure but I have been under pressure before and I’ve been able to deal with it the main difference this time round though is that  is this is the only chance for Nigeria to redeem itself on football scene and all eyes are on us to do well and this makes it a little more difficult for the boys and l.” said Eguavoen

Eguavoen believes  hosts Morocco will probably be under more pressure on Saturday being the home side and as a result he will aim to get his team to enjoy playing the matches and try and show their abilities and silk more.  “I know  we’ve got the talent and these boys can do well here if we get a good start. We need to get a win against Morocco and once we get there we won’t have any problems.”

“The first match of any tournament  is very important.  A positive result from the first game brings confidence going into the other games but if  you don’t get something from the first game then you put yourself under pressure in games ahead.” said Eguavoen.

“Nigeria is blessed with talented players and we have been telling them know this is an opportunity for them to showcase their abilities so I think the boys  ready to do just that and if they do so I think our team is  good enough to finish in top three and  qualify for London 2012 Olympics.”