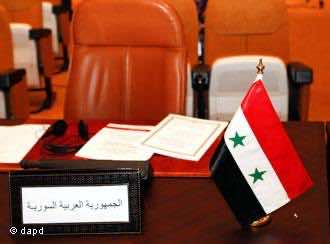 A deadline set by the Arab League for Syria to allow entry to observers has passed without response. The League has threatened Damascus with sanctions as the regime continues to crack down on opponents.

An ultimatum issued by the Arab League for Syria to allow entry to a team of observers or face sanctions was met with silence by Damascus on Friday.

“Until now there has been no response from the Syrian government,” an Arab League source in Cairo told news agency AFP, as the 11 p.m. GMT deadline expired. Meanwhile, reports said at least six people were killed on Friday during anti-regime protests.

The League wants 500 observers to enter Syria to monitor the situation, but Damascus has reportedly agreed to let in only 40.

The Arab League’s economic and social council, including officials and ministers, is to meet on Saturday ahead of a meeting of Arab foreign ministers on Sunday. They are expected to discuss imposing sanctions on Syria.

That could include the suspension of flights to Syria and the freezing of government bank accounts. Ministers have also said that commercial trade with the Syrian government could be halted, “with the exception of strategic commodities so as not to impact the Syrian people.”

Pressure on Syria has also come from neighboring Turkey. Foreign Minister Ahmet Davutoglu on Friday said that the ultimatum had represented a final chance for Assad’s regime.

“Syria had been expected to say yes to the observers,” Davutoglu said after the deadline’s expiry. “As it said no, it increased… the concerns on the humanitarian situation.”

The Syrian Observatory for Human Rights said that at least six people were killed on Friday as thousands demonstrated across the country against the regime of President Bashar al-Assad.

Damascus denied a report that its security forces had opened fire indiscriminately in the Eastern city of Deir Ezzor, killing one 17-year-old.

However, state television said security forces had killed 16 members of a “terrorist gang” in the central province of Homs, arresting dozens and seizing large quantities of weapons.

In a statement on Friday, the Syrian military vowed to “cut every evil hand” that threatened national security.

Syria’s defiance of the ultimatum comes amid reports of army defectors and armed civilians fighting Assad’s forces in the uprising, with activists urging Syrians to support the rebel Free Syrian Army.

UN Secretary General Ban Ki-moon said on Friday he was “extremely concerned at the escalating crisis and mounting death toll,” in the country.

The UN estimates that at least 3,500 people have been killed in Syria since the uprising began in March.