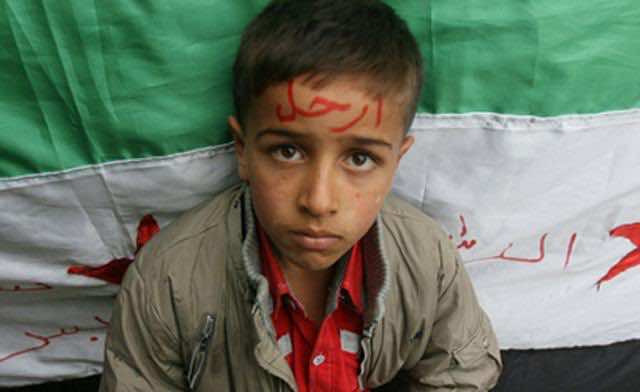 The United Nations said Friday that international help is needed to feed 1.5 million people in crisis-torn Syria, but humanitarian corridors were not yet justified.

U.N. humanitarian chief Valerie Amos said almost three million people out of Syria’s population of about 20.5 million had been affected by the deadly crackdown on protests launched by President Bashar al-Assad since March.

Thousands are now in camps in neighboring Lebanon and Turkey and many more have fled protest cities to seek refuge with family and friends in other parts of Syria.

The Syrian Red Crescent and other Syrian groups and individuals have so far provided the bulk of humanitarian relief in Syria because the government has severely restricted access.

“As of now, the United Nations and partners have been unable to comprehensively assess people’s needs,” Amos said.

The U.N. official referred to a number of suggestions for setting up humanitarian corridors and safe zones.

“At present, the humanitarian needs identified in Syria do not warrant the implementation of either of these mechanisms. Before any further discussion of these options, it is essential to get a clearer sense of what exactly people need, and where,” Amos said.

The U.N. estimates that at least 3,500 people have been killed in the crackdown since mid-March.

Arab officials are scheduled to prepare plans for sanctions against Syria on Saturday over its failure to let Arab League monitors oversee an initiative aimed at ending the violence.

Damascus missed a Friday deadline to sign an agreement under which the Arab League planned to send observers to Syria.

But despite Syria’s pledge this month to withdraw its army from urban areas and let in the monitors, the violence has continued, prompting reprisals from the Arab League, stinging rebukes from Turkey as well as the French proposals for humanitarian intervention.

The Arab finance ministers were to thrash out a package — expected to include the suspension of flights and freezing of government assets — which will then be put to foreign ministers on Sunday.

But Iraqi Foreign Minister Hoshyar Zebari, whose country has close economic ties with Syria and a large refugee community in its western neighbor, said it was “not possible” to impose sanctions on the Assad regime.

Damascus says regional powers have helped incite the violence, which it blames on armed groups targeting civilians and its security forces.

Activists said government forces shot dead at least four demonstrators in Damascus on Friday who were appealing for foreign intervention to stop the crackdown. Two other civilians were killed in raids on their homes, they said.

The Syrian military said 10 personnel, including six pilots, were killed in an attack on an air force base on Thursday and that the incident proved foreign involvement in the eight-month revolt against Assad.

Arab ministers had warned that unless Syria agreed to let the monitors in, they could consider imposing sanctions including suspending flights to Syria, stopping dealings with the central bank, freezing Syrian government bank accounts and halting financial dealings.

They could also decide to stop commercial trade with the Syrian government “with the exception of strategic commodities so as not to impact the Syrian people”, the ministers said.
The League’s economic and social council, which can comprise officials or ministers, will meet on Saturday to prepare recommendations for a meeting of foreign ministers the next day.

Syria’s economy is already reeling from months of unrest, aggravated by U.S. and European sanctions on oil exports and several state businesses.

Turkish Foreign Minister Ahmet Davutoglu said he would join Sunday’s meeting of Arab foreigh ministers to harmonize his government’s own measures with those of the Arab League, saying that Ankara’s former ally had missed its “last chance” by failing to heed the Arab ultimatum.

“I want to say clearly we have no more tolerance for the bloodshed in Syria,” he said.

The stepped-up pressure followed a French proposal for “” to be set up through which food and medicine could be shipped to alleviate civilian suffering.

The French plan for humanitarian corridors could link Syrian civilian centers to the frontiers of Turkey and Lebanon, to the Mediterranean coast or to an airport, and enable supply of humanitarian supplies or medicines to people in need.

Foreign powers are seeking to persuade Damascus to accept such a scheme, diplomats say.

“So far they haven’t said no, so we may be able to convince them,” said a Western diplomatic source. “As long as we are in the humanitarian dimension it is harder for countries like Syria to refuse to allow aid to civilians.”

Without Syrian agreement, the only way humanitarian corridors could work is if they were backed by force, ideally supported by a U.N. resolution.

Some measure of comfort for Assad came from longtime ally Russia, China and other countries, which expressed opposition to sanctions and warned against a foreign military intervention.

“At the current stage, what is needed is not resolutions, not sanctions, not pressure, but internal Syrian dialogue,” Russian Foreign Ministry spokesman Alexander Lukashevich said.

Lukashevich said Russia supported the Arab League’s call for a halt to the violence but that “radical opposition” groups with foreign support shared the blame. Outside military intervention was “absolutely unacceptable”.

After a meeting in Moscow on Thursday, diplomats from Russia, China and the other three emerging-market BRICS countries -Brazil, India and South Africa – also warned against foreign intervention without U.N. backing.