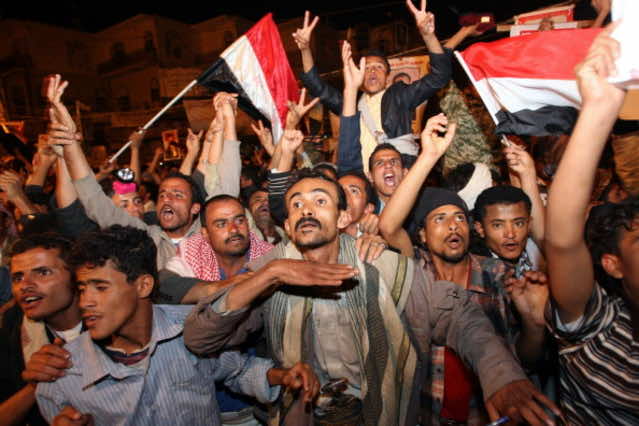 Yemen’s vice president called a presidential election for February 21, the Saba state news agency said on Saturday, under a deal aimed at ending months of violent protests against the rule of President Ali Abdullah Saleh.

Saleh signed the deal on Wednesday under which he transferred his powers to Vice President Abd-Rabbu Mansour Hadi after 33 years in office and 10 months of protests that have brought the country to the edge of civil war.

Hadi issued a decree on Saturday setting the election date.

“Registered voters and everyone who has reached the legal age … are called on to vote in early elections for a new president of the republic starting at 8 o’clock on the morning of Tuesday, February 21, 2012,” said the decree, a text of which was carried by Saba.

Under the agreement, signed with the Yemeni opposition at a ceremony hosted by Saudi King Abdullah in the capital Riyadh, Saleh will receive immunity from prosecution and keep his title until a successor is elected.

If the deal goes according to plan, Saleh will become the fourth Arab ruler brought down by mass demonstrations that have reshaped the political landscape of the Middle East.

Hadi was charged with calling an early presidential election within three months and forming a new government with the opposition.

Hundreds of people have been killed during months of protests seeking Saleh’s overthrow. The political deadlock has reignited simmering conflicts with separatists and militants, raising fears that Yemen’s al Qaeda wing could take a foothold on the borders of Saudi Arabia, the world’s top oil exporter.

Details of the power transfer deal, drawn up by Yemen’s richer neighbours in the six-member Gulf Cooperation Council (GCC) earlier this year, and thwarted by Saleh on three separate occasions, were hammered out by U.N. envoy Jamal Benomar, with support from U.S. and European diplomats.