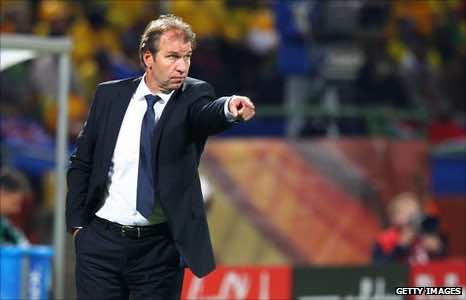 Host team Morocco won the opening match of the inaugural CAF U-23 African championship 1-against Nigeria in Tangiers. The game was barely two minutes old when Nigeria were forced into a substitution after defender Udoh Kingsley came off injured from a tackle and was replaced by Ibok Edet.  On a chilly night watched by an appreciative by small crowd in Grand Stade de Tangiers hosts Morocco started more purposeful and earned the first corner in the 4th minute when Yacine Qasmi’s goal bound attempt was blocked by Iyke Anyanwu but Nigerian goalkeeper Minru Ajiboye plucked the resultant corner.

Nigeria picked up the pace with Stephen Worgu and Daniel Uchechi stretching out the Moroccan defence with some probing runs on the flanks. The crosses however we were too often too close to the goal and Moroccan keeper Yassine El-Kharroubi easily dealt with them.

Moroccan left back Zakarya Bergich combined with Captain Driss Fettouhi plying the left channel and creating chances for their forwards. Morocco’s opener came in the 28th minute when Anyanwu mistimed his tackle on Qasmi inside the penalty area and the referee pointed to the sport. Abdelaziz Barrada struck a hard a low shot into the bottom left corner past a diving Ajiboye much to the delight of the home crowd.

Nigeria responded with Jude Ilochukwu testing El-Kharroubi from a distance but Nigeria did not make much of the corner kick and as the half drew to a close Worgu stumbled when through on goal . On the other end Sofiane Bidaoui jinxed his way past a couple of tackles but shot weakly at goal.

At resumption Morocco pushed forward looking for the second goal as they dominated play. The hosts were rather wasteful in-front of goal with the worst miss going to Bidaoui. A delightful cross from the right flank eluded everyone and with an open goal at his mercy Bidaoui contrived to miss. Nigeria made a few substitutions with Kayode Olarenwaju as they went in search for an equalizer. The high balls aimed at Nigerian front men were easily cut off by the taller Moroccans and as the game went on the team that looked like scoring was Morocco.

Nigeria got a free kick in injury time on the edge on the penalty box but Lawal’s effort was defended well as Morocco hung on for all three points in the opening match.