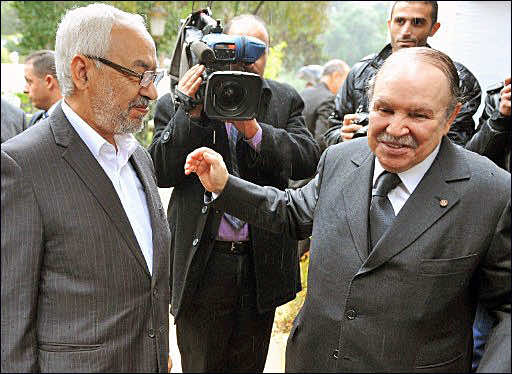 Ennahda leader Rachid Ghannouchi this week paid a three-day visit to Algeria, where he met with President Abdelaziz Bouteflika and various party leaders.

“We do not want an Islam which denies democracy and the arts,” Ghannouchi said Monday (November 21st) after meeting with Society Movement of Peace (MSP) chairman Bouguerra Soltani in Algiers. “Our vision feeds on a combination of Islam, democracy and modernity.”

Ghannouchi, who spent the first few years of his exile in Algeria before being asked to leave the country when the security crisis struck, emphasised the “excellent” nature of relations between Algeria and Tunisia. These relations would be “even better in the new era of the Jasmine Revolution”, he said.

Bouteflika congratulated the Islamist party on their electoral achievements, before paying homage to the Tunisian revolution.

“Tunisia has provided the model for peaceful transition,” he said.

The Algerian president promised his guest that he would work for development in the border zones.

One of Ghannouchi’s colleagues, who attended the meeting, revealed to El Khabar that the Libyan issue was discussed at length, with Ghannouchi reassuring Bouteflika that “there was no reason to doubt the intentions and political plans of the new Libyan government”.

The Ennahda chairman went on to express his view that “relations between Algeria and Tunisia bode well for the future of the whole Maghreb region”.

During his stay, the leader of the Islamist party was received by Prime Minister Ahmed Ouyahia as well, but there were no meetings with the opposition.

The Labour Party (PT), the Front of Socialist Forces (FFS) and the Rally for Culture and Democracy (RCD) all said that they had not asked to see him.

In another development in Algerian-Tunisian relations, Tunisian President Moncef Marzouki and Tunisian Constituent Assembly leader Hamadi Jebali are to undertake their first official visit to Algeria in the near future, according to L’Expression.