Morocco World News
Home Highlights on Morocco Secretary General of the PJD: We Will not Interfere in People’s Personal...

New York - The Secretary General of Justice and Development Party, which won the November 25th legislative elections, Abdelelah Benkirane, assured Moroccans that his party will not interfere in their daily lives.

By
Adnane Bennis
-
Adnane Bennis is a national of Morocco, obtained his Bachelor’s Degree in Computer and Information Science from East west University in Chicago.
Nov 27, 2011

New York – The Secretary General of Justice and Development Party, which won the November 25th legislative elections, Abdelelah Benkirane, assured Moroccans that his party will not interfere in their daily lives.

In a statement carried by the German news agency DPA, Benkirane said that: “despite its Islamic leanings, the Justice and Development Party will not interfere in the affairs of Moroccans,” referring to the strategy of the party to avoid going into the issues that stir controversy such as consumption of alcohol or the wearing of headscarf.

In the same regard, in a statement to Al Arabiya, Benkirane stressed that his party will lead the country through its political rather than religious perspective, stressing that the religious discourse  should take place in the mosque. “We are a party that is involved in politics and we will not interfere in people’s personal lives,” he added.

The general secretariat of the PJD held a meeting on Saturday night to discuss the provisional results declared by the Ministry of Interior, which has so far resulted in a victory of 80 seats for the party out of 288 seats.

In an interview with the TV station 2M, Abdelilah Benkirane said that his party “is ready to form coalitions with the parties of the Koutla” (an alliance composed of the  Independence Party, the Socialist Union of Popular Forces and the Progress and Socialism Party). He added that “the party remains open to other political parties, save for one political party with which we had big differences”, in a reference to the Party of Authenticity and Modernity (PAM).

Thirty-one parties were competing for the 395 seats in the lower house of parliament, 70 seats more than during the last election in 2007.

The polls were overseen by 4,000 observers, representing international and national bodies.

Following the victory of the PJD in the legislative elections, reactions of Moroccans were mixed between hope for a better future under the upcoming government and fear that the latter would impose a strict moral code on society.

Some people contacted by Morocco World News on Saturday expressed their happiness to see the PJD emerge as the winner of the elections, saying that it was their last hope for Moroccans to dig the country out of the hole in which many years of mismanagement, nepotism and corruption had plunged the country. “It is the lesser of two evils”, said one Moroccan living in the United States, who preferred to speak on the condition of anonymity, adding, that the PJD has a “good reputation among Moroccans for being clean and being composed of highly educated and competent people”.

Conversely, others expressed their fear that the PJD might pose a threat to the modern way of life of Moroccans and their tolerance for other religions.

“I am afraid the PJD is hiding its real agenda and is playing a populist card,” said Houda, a resident from Casablanca who asked that her last name not be given. “What causes great concern for me, is the impact that this election will have on the image of Morocco at the international level, especially on the tourism sector, which is the main source of income of the country,” she added.

After the announcement of the provisional results of the parliamentary elections, Secretary General of the PJD, Abdelillah Benkirane, told the press, that his party will uphold Morocco’s longstanding relations with the US and the EU. “What we claim, today, is to work together, in a democratic way, within the framework of balanced ties,” he said. 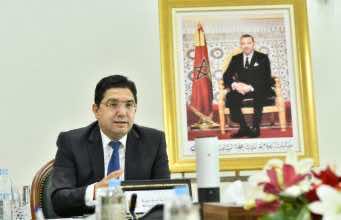