By Marwa Awad and Tom Perry 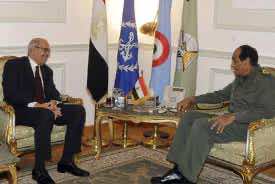 By Marwa Awad and Tom Perry

Presidential candidate Mohamed ElBaradei has offered to lead a government of national unity, raising the pressure on Egypt’s ruling generals amid protests demanding an immediate end to army rule.

Activists are calling on citizens to converge again in Cairo’s Tahrir Square on Sunday, a day before the start of a parliamentary election overshadowed by political turmoil and the threat of violence.

The interim government led by Essam Sharaf resigned last week as protests against army rule intensified in Cairo and other cities. The violence has left 42 people dead.

Facing its worst crisis since it pushed President Hosni Mubarak from office during a popular uprising in February, the army has promised a speedier handover to civilians, offered a referendum on military rule and named a new prime minister.

But demonstrators have rejected the military’s choice of a 78-year-old veteran of Egyptian politics to lead a new government and say it must hand over power to civilians now.

Some protest groups want ElBaradei to head a civilian body that would replace the ruling military council in supervising Egypt’s transition to democracy.

ElBaradei himself is respected among pro-democracy campaigners but many Egyptians view him as out of touch because he spent much of his career outside the country, particularly during his time at the head of the U.N. nuclear watchdog.

His campaign team said late on Saturday he was prepared to drop his bid to be head of state if he is asked to lead a transition government.

It said he has met revolutionary youth coalitions and political parties who had rejected Ganzouri’s appointment.

“The political forces and groups stressed that the only way out of the crisis is to form a national coalition government with full powers to manage the transitional period until presidential elections are held,” his team said in a statement.

It said ElBaradei would abandon his bid for the presidency if he were asked formally to form a government, “so as to be completely neutral in the interim period”.

Many Egyptians yearning for an end to upheaval want the parliamentary election to begin on Monday on schedule and some protesters agree, despite their hostility to those in power.

Abdul Aal Diab, a 46-year-old state employee protesting in Tahrir, said the election should not be mixed up with demands for the departure of Field Marshal Mohamed Hussein Tantawi, who heads the military council.

“This is one thing, that is something else,” he said. “Everyone will be in the polling stations come Monday.”

“Why are you so sure?” interrupted 27-year-old Mustafa Essam. “I won’t go. I have no faith in anyone. We don’t know anything about these elections.”

Groups chanted slogans against the generals inTahrir Square overnight as other people wandered among banners, tents and tea stalls fully equipped with chairs and tables that lent the protest an air of permanence.

The prolonged political turmoil has compounded an economic crisis that threatens to make life even harder for the millions of Egyptians living in poverty.

Alarmed by the violence in Cairo and other cities, the United States and the European Union have urged a swift handover to civilian rule in a country where the prolonged political turmoil has compounded economic woes.

The vote due to start on Monday is billed as Egypt’s first free and fair election in decades, but a confusing array of candidates and parties and fears of bullying, bribery and violence at polling stations offer voters a daunting challenge.

The complex, drawn-out election to parliament’s lower house concludes in early January. Voting for the upper house and the presidency will follow before the end of June.

Reflecting security concerns, Ahmed al-Zind, head ofEgypt’s Judges Club, told a news conference the organisation had taken out private insurance to cover all the judges involved in supervising the election.

Sunday’s rally call suggests the loose pro-democracy movement spearheading the protests has rejected the army’s decision to recall Kamal Ganzouri, a 78-year-old politician who served as prime minister under Mubarak during the 1990s.

A television clip circulated on Facebook in the past 24 hours shows Ganzouri sitting one seat away from Tantawi on January 25, the first day of Egypt’s revolt, as they listen to a speech by former Interior Minister Habib al-Adli, who is on trial with Mubarak on charges of ordering protesters to be killed.

Egyptians protesting against the appointment of Ganzouri clashed with police firing tear gas in central Cairo on Saturday. The Interior Ministry said a protester was killed by accident, an account backed by Ahmad Zeidan, 18, an activist at the sit-in who said he had seen the youth being run over.