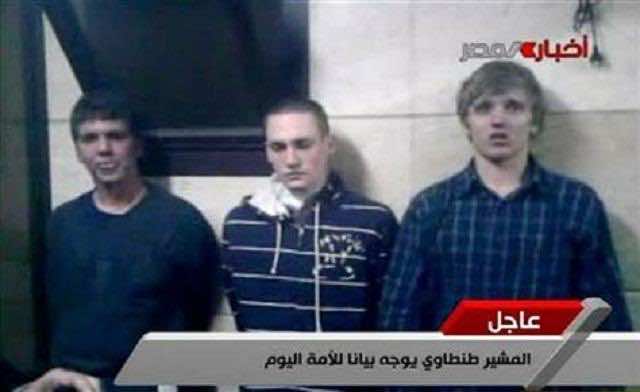 By THE ASSOCIATED PRESS

The last of the three American students to arrive home after being arrested amid Cairo’s tumultuous protests described his first hours in custody as “probably the scariest night of my life ever,” saying the youths were hit, forced to lay for hours in the dark nearly in a fetal position and threatened with guns.

Derrik Sweeney, 19, spoke with The Associated Press shortly after arriving at St. Louis’ international airport late Saturday night, greeted with joyful shouts of anxious parents who tightly hugged him as dozens of others in a crowd of supporters and relatives held up signs reading, “We love you Derrik” and “Welcome home, Derrik.”

“The first night was probably the scariest night of my life ever. I was not sure I was going to live. They said if we moved at all, even an inch, they would shoot us. They were behind us with guns,” Sweeney told the AP in a brief phone interview, adding the three had spent about six hours curled up uncomfortably with their hands behind their backs.

Egyptian authorities said they had arrested Sweeney a week earlier along with 19-year-old Gregory Porter and 21-year-old Luke Gates on the rooftop of a university building near Cairo’s Tahrir Square amid violent protests engulfing the streets below.

Officials accused the young men of throwing firebombs at Egyptian security forces fighting with the protesters, but Sweeney said he and the other Americans “never did anything to hurt anyone” and never were on the rooftop nor handled or threw any explosives. He called those accusations “very clearly just lies, 100 percent.”

He said conditions in custody markedly improved after the opening night’s ordeal when they three were taken to some “legitimate” prison or jail. He didn’t elaborate on who he believed was holding him the opening night but he called the treatment humane in the ensuing days.

At his airport arrival, he also said things became much better in subsequent days when he was allowed to speak with U.S. consular official “and then my mom.”

An Egyptian court ordered the students’ release Thursday, and they were on flights out of Cairo on Saturday. Porter and Gates also arrived back in their home states late Saturday, all greeted by relieved family members.

“I’m not going to take this as a negative experience. It’s still a great country,” said Gates, shortly after getting off a flight in Indianapolis.

The protests had flared starting Nov. 19, in anticipation of the landmark parliamentary elections in Egypt due to start Monday. On Friday, the crowd grew to more than 100,000 people and on Saturday fresh clashes erupted between security forces and the Egyptian protesters demanding the military step down. The protests Saturday left one man dead as the violence threatened to overshadow the looming elections.

Porter also was met by his parents and other relatives earlier Saturday evening when he landed at Philadelphia International Airport. Porter took no questions, but said he was thankful for the help he and the other American students received from the U.S. Embassy in Cairo, administrators at the university they were attending, and attorneys in Egypt and the U.S.

“I’m just so thankful to be back, to be in Philadelphia right now,” said Porter, who is from nearby Glenside, Pennsylvania, and attends Drexel University in Philadelphia.

All three left the Egyptian capital Saturday morning on separate connecting flights to Frankfurt, Germany, an airport official in Cairo said. The three were studying at American University in Cairo.

Joy Sweeney said staff at the school packed her son’s bags because he wasn’t allowed to return to his dorm room. Waiting for her son had been grueling, she said shortly before he arrived, but she was grateful he would be home before the holiday weekend was over.

“He still hasn’t processed what a big deal this is,” she told the AP shortly before her son arrived at the airport.

She said she was trying not to dwell on the events of the last week and was ecstatic that her son, a student at Georgetown University in Washington, was coming home. The family is from Jefferson City, Missouri, about 130 miles (210 kilometers) west of St. Louis.

Earlier in the week, she talked about how she put a Thanksgiving celebration on hold because the idea seemed “absolutely irrelevant” while her son still was being held.

“It’s been an emotional rollercoaster. I mean, I don’t know how to describe it other than that,” she said Saturday night. “But I never looked at the worst-case scenario.”