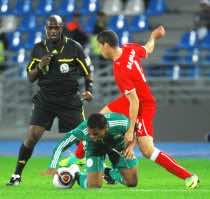 After seeing his side pick up the first three points in the opening match of the U-23 African Championship in a 1-0 win over Nigeria, Morocco’s coach Pim Verbeek said he was a relived man and complimented his boys for a fine performance. “I am pleased with the way we played and it is great to win the first match. We created many chances that should have seen us score more than the one goal we got. If there is something that l can tell my team about today game it is that we should learn to put away chances we create.

Nigeria is such a side that we were not safe at 1-0 and needed to get more goals. Defensively, I thought were solid, well organized and we kept Nigeria at bay, so I am very happy about our first game.” It is a difficult situation to deal with and I understand what Eguavoen is saying,” Said Verbeek, while expressing sympathy with his opposite number, Austin Eguavoen, who had to make an injury- induced substitution very early in the match. We however need to see this win for what it is and not lose focus of the next two matches ahead. We meet Algeria next and that is a derby which means it will be a tough encounter. I expect my injured players to be back for that game. We have two days rest, which is hardly enough but that is the same for all teams, so new have to be ready for Algeria” concluded Verbeek.

We didn’t do enough – Austin Eguavoen

Nigerian U-23 coach Austin Eguavoen said that his team did not do enough nor did they play to the best of their abilities in their opening 1-0 loss to Morocco in Tangiers. “We didn’t do enough and l the boys started off rather nervously but saying that we lost a player in the first three minutes of the match and that disturbed us as a team. That early substitution due to injury to Udoh Kingsley threw us out of stride and we seem to be chasing the game from then on. We did have some joy using the left flank though but today our forwards were not sharp and alert enough to get onto the end of the crosses. Overall though it was a good performance and one we can build on from. For now we will put this game behind us and focus on the next game. There is every possibility that we can still meet Morocco again in the final of this championship. “said Eguavoen.

Meanwhile Nigerian forward Daniel Uchechi said that the remaining two games had taken more significance now that they had lost the opening match, “We know we can play better and taking one game at a time we will go back and look at the game again to see where we went wrong today and correct that for the next game. This game is gone now and we have to look forward to the next match.”

Driss Fettouhi – The Moroccan captain said “Winning our first is great but we will not allow ourselves to relax thinking we are have qualified already. The win has increased our self confidence, which is good but there is still plenty football to be played. We want to win this tournament for Carcela and make it to the Olympics and hopefully he can join us if we make it through.”