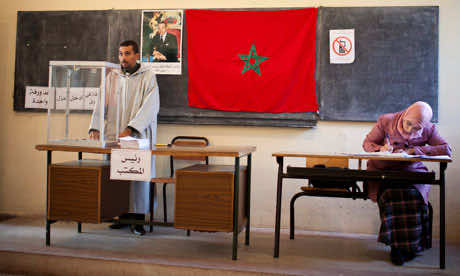 Morocco is a “rare example” of an Arab state which has opted for democratic reforms amid the regional political unrest, wrote Sunday the Financial Times.

“Observers are closely watching the progress of Morocco, a rare example of an Arab state which has opted for dramatic reforms amid the wave of regional political turmoil,” said the British daily newspaper, noting that the 45% voter turnout was “higher than in previous elections.”

“It was a fair election,” the newspaper quoted Bob Rae, leader of the Liberal Party of Canada and a leader of the team monitoring the vote, commenting on Morocco’s parliamentary election, held on Friday the first poll after the adoption of the new constitution last July.

With 80 seats so far, the Justice and Development Party (PJD) is on course to win by a landslide.

Morocco’s parliamentary election drew the attention of different international media, which considered the event as a watershed moment for the country and highlighted the holding of the election in a democratic and fair climate.

They focused on the climate of transparency and serenity that marked the holding of the poll, and the landslide victory by the PJD according to partial account.

In Moscow, the online news website “Electrone Gorod” said that the election was held in a fair and transparent way, which respects democratic standards.

In an article on Friday’s poll, “Electrone Gorod” said that Moroccan and foreign observers agreed that the election was fair and democratic.

The Indian press, for its part, said the election was “historic” and comes as a result of the “comprehensive and deep reforms undertaken by King Mohammed VI,” as Indian newspaper “Hindustan Times” put it.

It pointed out that Morocco is a “model to follow for many Arab countries.”