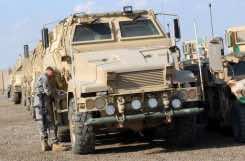 US soldiers put on body armour and check vehicles and weapons at a base near Baghdad, preparing for 10-plus hours on the lookout for danger as they escort a convoy to Kuwait.

US President Barack Obama announced on October 21 that all US soldiers would depart Iraq by year’s end, and much of the equipment they are taking with them travels by road to the Gulf emirate of Kuwait.

“We’re a brigade out of Kuwait, and what we do is we’re the gun truck portion … we escort, approximately four military semi-trucks and then approximately, anywhere from 30 to 40” civilian-driven trucks, First Lieutenant Andy Krochalk told AFP before the convoy departed.

“Usually once a week or so we’ll head up somewhere in Iraq, one of the bases, we’ll show up here, and they’ll get loads of stuff pulling out … and then essentially we escort ’em back down to Kuwait,” Krochalk said.

This will be followed by a break ranging from a few days to over a week, and “then we’ll turn around and come back” to do it all over again.

With “no problems, you’re looking at about 10 hours” from the Baghdad area to Kuwait, he said.

But “that trip can turn into 20-plus, depending on break-downs,” he said, adding that there are sometimes stops at bases in between, but not always.

For the first two months after his unit arrived in July, the focus was on escorting supply convoys up to bases in Iraq, but “we got switched half-way through because there was a little bit more of a push to get the equipment out,” he said.

His unit will continue with this mission until the withdrawal is completed, he said.

“To be a part of this pullout is pretty neat, it’s pretty rewarding,” he said.

Asked if the long journeys through potentially hostile territory were nerve-racking, Krochalk said “yes and no.”

“A lot of guys that have been here before, you know, we know our little areas where historically stuff had happened, so you do get a little nervous in certain areas,” he said.

But “you definitely see the Iraqis being a lot more proactive than (when) I was here last time” in 2005-2006, he said, so “that’s definitely obviously a plus to see that.”

“There’s only a handful of times where I think I’ve actually felt very nervous out here.”

Specialist Kyle Beaulieu-Sanders, who is on his first overseas deployment, is a gunner on one of the MRAPs.

His job “is to provide overwatch, I’m the eyes on the road, as far as marking debris and stuff in the road for the rest of the convoy … just making sure that all the trucks are aware of what’s coming ahead, since we are the front truck.”

“It’s just constant suspense, you could say, because you never know what’s out there,” he said. “You’re always eyes open, eyes on the road, trying to make sure that you don’t miss something.”

“For the most part, that keeps you on your toes, that keeps the adrenaline going — making sure that you don’t miss anything, for your sake and for the rest of the convoy behind you.”

Private First Class Joseph Arens, who is also on his first deployment, is the driver of another MRAP.

“After a while, it gets a little long, sitting in the truck. We’re always on the lookout … just making sure we’re picking the right path to drive through, following the trucks in front of you, making sure nobody comes up behind you,” he said.

“At first it was pretty stressful, but then you kind of get used to the stress. But you’re still always on top of things, keeping a good lookout,” Arens said.

“I don’t mind driving,” he said. “I’d rather drive instead of sitting up in the top in the elements, gunning.”

There are usually one or two convoys leaving VBC per day, though not all are escorted by Kuwait-based soldiers, said Captain Andrea Hahn, the VBC garrison command public affairs officer.

The convoys carry a mix of military and civilian equipment, she said.

“It’s really good to see this kind of movement going on because it just shows that VBC is finally closing down and we’re getting out of here,” Hahn said.

As of November 20, 2.1 million pieces of equipment had been taken out ofIraq, while 400,000 remained to be removed, according to Major Kim Rey, a spokeswoman for United States Forces -Iraq.