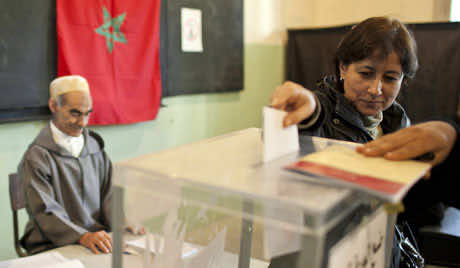 The legislative elections that took place in Morocco on Friday November 25 were held within the framework of a “correct democratic approach”, Spanish Foreign Minister has said.

The polls also took place in a climate of stability, Trinidad Jiménez said in statements reported by Spanish media, describing as “very positive” the holding of these elections, especially with a turnout of 45%.

She congratulated the Moroccan people on these elections and the Justice and Development Party (PJD) which won the most of seats.

The minister expressed hope that Morocco will continue consolidating its progressing democratic process, stressing that the Kingdom can count on her country’s continued support and collaboration.

Historic win for the PJD

The final results released on Sunday night by the Ministry of the Interior confirmed what analysts consider as “historic win” for the Party of Justice and Development (PJD), as it won 107 seats, which, in accordance with the provisions of the new constitution approved last July, allows it to head the upcoming government. The center right Istiqlal, a potential ally for the PJD, was placed second with 60 seats up from 52 seats in 2007.

This is the first time that the PJD will be entrusted with the task of heading the government,  after it spent 14 years in opposition. In its first participation in the elections in 1997, it obtained 8 seats. In the first elections held under the rule of King Mohammed VI in 2002, it obtained 42 seats and it 2007 it won 47 seats and came in second position  after the Istiqlal party, which won 52 seats.

Morocco’s National Human Rights Council (CNDH) will present, on Tuesday at a press briefing in Rabat, its preliminary report on the observation of Friday’s parliamentary elections.

The CNDH had mobilized 249 scrutineers to oversee the holding of this poll across Morocco, said a statement of the Council on Monday.

The observers’ delegation of the Parliamentary Assembly of the Council of Europe (PACE) had hailed, in a news conference Saturday in Rabat, the National Human Rights Council for its remarkable efforts during the electoral campaign.