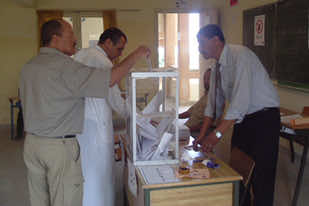 Moroccans cast their votes on Friday in the first legislative poll after the adoption of the new Constitution last July, which further reinforces the powers of the Parliament and the Prime Minister.

The poll of November 25th demonstrated the improvement of the democratic practice and public affair management in Morocco, said the OMDH in a statement, recalling that the voter turnout reached over 45%.

The Moroccan human rights watchdog also said “some irregularities and incidents (that occurred in the day of election) did not affect the voting operation.”

With 107 seats in the 395-seat House of Representatives, the Justice and Development Party (PJD) won a landslide victory in Friday’s election.

A calm atmosphere of free choice marked the holding of Morocco’s parliamentary election, said on Saturday Francine John Calame, member of the observers delegation of the Parliamentary Assembly of the Council of Europe (PACE).

While the PACE delegation welcomes the improvement of the electoral framework following the adoption of a new constitution enshrining fair elections, it also deplored, that amendments to electoral legislation were adopted belatedly, something which, in the words of Francine John Calame, “does not meet the practices recommended by the Council of Europe concerning elections.”

The poll was “conducted transparently” and “professionally organized” as the scrutineers of the National Democratic Institute (NDI) confirmed.

“Morocco’s November 25 parliamentary elections were conducted transparently and professionally” despite “isolated irregularities,” said the 41-member NDI delegation, which visited, before and during election day, over 200 polling stations across 31 constituencies.