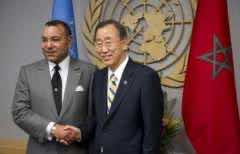 United Nations Secretary-General, Ban Ki-moon, today commended the peaceful staging of legislative elections in Morocco and called for the incoming government to respond to the aspirations of the North African country’s people.

Moroccans voted on Friday to elect the 395 members of the Assembly of Representatives, the country’s lower house of Parliament, in line with constitutional reforms proposed by King Mohammed VI earlier this year and approved by a public referendum in July.

The reform process was introduced after public demonstrations in Morocco in February, echoing the popular protest movement known as the Arab Spring that has swept North Africa and the Middle East this year.

In a statement issued today by his spokesperson, Mr. Ban welcomed the conduct of the polls and encouraged the government to be formed in the weeks ahead to implement the reforms outlined by the King and approved by the public.

The statement also called on the incoming government “to respond concretely to the legitimate aspirations of the people of Morocco, in close consultation with all national stakeholders, including the women and the youth.”

This is the first time in Morocco’s history that an Islamist moderate party will be in charge of heading a government. The first time the PJD participated in legislative elections was in 1997, when it obtained 8 seats.

In press conference held on Sunday in the Party of Justice and development’s (PJD) headquarters, after the announcement of the final results of the elections, Abdeliilah Benkirane, Secretary General of the PJD, expressed that he is aware of the aspirations of the Moroccan people, as well as the social, political and economic juncture Morocco is going through, indicating that the next government is required to give positive signals to citizens.