Fez - The final results of the legislative elections in Morocco that resulted in the historic win of the moderate Islamist PJD with 107 seats in the parliament is still drawing much attention. 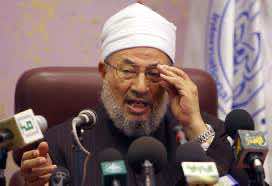 Fez – The final results of the legislative elections in Morocco that resulted in the historic win of the moderate Islamist PJD with 107 seats in the parliament is still drawing much attention.

The Egyptian Islamic Scholar Yusuf al-Qaradawi was among the first Islamic scholars to congratulate the PJD’s leaders for their victorious win.

The Doha-based Muslim scholar sent a formal letter to the PJD’s Secretary General Abdelilah Benkiran, the soon-to-be-appointed Head of Government, to congratulate him and urge him to continue his hard work to meet the aspirations of the Moroccan people who entrusted his party with the majority of votes.

“In my name and the name of the International Union of Muslim Scholars, we congratulate the Kingdom of Morocco, its great people, its wise leadership with the highest expressions of congratulations and appreciation in the free and honest parliamentary elections after the recent constitutional reforms that we hope will be for the better for the people and the country,” Al-Qaradawi stated.

Al-Qaradawi also expressed that “it is with a great pleasure and joy” that he “received the news of the win of the Islamic Development and Justice Party.” “We would like to affirm to your blessed party to always look forward towards the interests of its nation in the light of the Quran, the tolerant teachings of the Sunnah and the Islamic Shari’a. We also hope that it will present the true image of our great tolerant Islam, and that it will be in accordance with the other loyal nationalist parties and the righteous people for a collaborative work to watch over the needs of the people, and to confirm to the Moroccan people that their trust was put in the right place, of which we are sure,” he added.

Yusuf al-Qaradawi has praised on several occasions the reforms that King Mohammed VI has been taking since his enthronement to guarantee more development and political socio-economic changes for his nation.