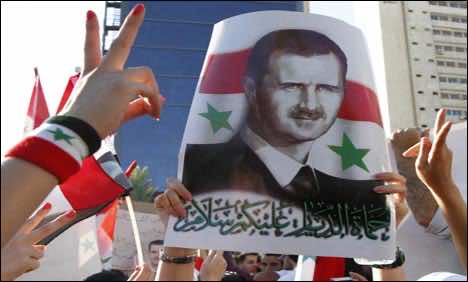 The European Union weighed in one day later, further tightening the financial screws on Damascus for its “brutality and unwillingness to change course”. The EU and United States jointly urged Syria to end violence, permit peaceful democratic transition, and allow in human rights observers.

Assad’s Foreign Minister Walid al-Moualem hit back, lambasting the Arab League for “a declaration of economic war” that he said had closed the door to resolving the crisis.

“Sanctions are a two-way street,” Moualem told a televised news conference. “I am not warning here, but we will defend the interests of our people”.

In Geneva, a United Nations commission of inquiry said Syrian military and security forces had committed crimes against humanity including murder, torture and rape, for which Assad and his government bore direct responsibility.

It demanded an end to “gross human rights violations” and the release of those rounded up in mass arrests since March by Syrian forces quashing pro-democracy demonstrations.

More than 3,500 people have been killed in eight months, according to the United Nations.

“We do not agree with these sanctions and we will not go along with them,” said Lebanese Foreign Minister Adnan Mansour.

The Arab League meanwhile appealed once more to Damascus, offering “a review of all of the measures” if Syria dropped its opposition to an Arab plan to end the crackdown.

Anti-Assad activists said eight civilians were killed on Monday in the province of Homs, which has seen some of the worst violence this month.

In an apparent political concession, which protesters have been demanding for months, Moualem said Syria planned to drop a constitutional clause which designates Assad’s Baath Party as the leading party.

The revised constitution foresees “multi-party” politics with “no place for discrimination between parties”, he said.

“The sanctions are still economic but if there is no movement on the part of Syria then we have a responsibility as human beings to stop the killings,” said Sheikh Hamad bin Jassim al-Thani of Qatar, the League’s point man on Syria.

“Power is not worth anything when a ruler kills his people.”

The president of the Union of Arab Banks, a division of the Arab League, said the sanctions would hit Syria’s central bank, which has “big deposits” in the region, especially the Gulf.

Moualem said 95 percent of the targeted money had already been withdrawn beyond the reach of sanctions.

Along with peaceful protests, some of Assad’s opponents are fighting back. Army defectors are grouped loosely under the banner of a Syrian Free Army and more insurgent attacks on loyalist troops have been reported in the last few weeks.

Arab nations wanted to avert a repeat of what happened in Libya, where a U.N. Security Council resolution led to NATO air strikes. Sheikh Hamad warned fellow Arabs that the West could intervene in Syria if it felt the League was not serious.

British Foreign Secretary William Hague said the Arab League sanctions demonstrated that “the regime’s repeated failure to deliver on its promises will not be ignored”.

One Western diplomat said Assad could, for now, count on support from China and Russia at the United Nations. But they may change position if he intensifies the crackdown and if the Arab League campaigns for international intervention.

China and Russia have oil concessions in Syria. Moscow also has a naval repair base on Syria’s Mediterranean coast and announced on Monday that it was sending warships there, in an apparent display of determination to defend its interests.

“The sanctions are likely to lose Assad support among those in Syria who have been waiting to see whether he will be able to turn things around, such as merchants who could now see their businesses take more hits,” the diplomat said.

Syrian officials blame the violence on armed groups targeting civilians. Government security forces say 1,100 of their members have been killed.

Assad, who inherited power from his father in 2000, said in an interview this month that he would continue the crackdown and blamed the unrest on outside pressure to “subjugate Syria”.