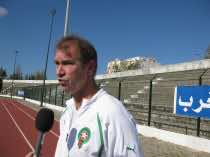 Morocco U-23 coach Pim Verbeek believes he has to deal with different kind of pressure ahead of his team’s second group match against Algeria. Having picked up three points in the last win Verbeek says they face a tough side in Algeria and need to play their best football to get a positive result. Verbeek was talking to Caf online.com ahead of the group A encounter to be played on Tuesday (29th November) in Tangiers

Cafonline.com: What do you make of Algeria?

Verbeek : Algeria is a good side and they have three or four dangerous attackers and there is no doubt about that we need good organization in defense and we have to be at our best to score goals and stop them in the game on Tuesday

Cafonline.com: You had a chance to see them after your match, you know them well do you?

Cafonline.com:  What is the position with regards to injuries in your camp?

Verbeek : The niggling problems and a case of one player being unwell seems to be under control and l expect to have all the players available but you never can tell before the game, as you can see we are in training here so hopefully when we finish all my players will still be fit and fine.

Cafonline.com:  Is a draw going to be good enough for you or you will go for a win?

Verbeek : To make it easy for ourselves we have to go for three points and try our best to win the match and qualify for semi-finals but if we draw we are still in the competition too. After the match we will have to find out if the draw would have been a good result because sometimes you realize after the match after 90 minutes you can say ok a draw was enough after all. As long as we have a draw we are still in the tournament.

Cafonline.com:   Were you disappointed with the low crowd at the first game in comparison to when you played friendlies here in Tangiers?

Verbeek :  l was surprised let me put it that way because when we played Cote d’ Ivoire and Gambia we had 25 000 and more than 35 000 in the second match but l don’t know what happened this time round. I think against Algeria there will be more people in the stadium and l am sure the Moroccans will want to be at this game against Algeria.

Cafonline.com: The Algeria coach said he hopes that you and they make the semi-finals from this group do you share that sentiment with?

Verbeek: No I do not look at it that way. l am only look after my team and l hope to get to the semi-finals and when we get there everything is possible.