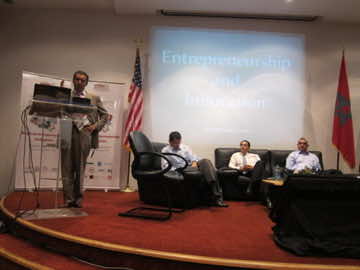 On October 27-31, a delegation, led by Lorraine Hariton, Special Representative of the US State Department, and sponsored by Partners for a New Beginning (PNB USA) and the North Africa Partnership for Economic Opportunities (NAPEO) visited Morocco, Tunisia and Algeria. PNB is a collection of public-private partnerships committed to broadening and deepening engagement between the United States and local communities abroad.

The U.S North Africa Partnership for Economic Opportunity is a regional partnership of PNB (PNB-NAPEO) and focuses on supporting locally owned and locally driven partnerships and projects in the Maghreb in the areas of entrepreneurship, education, science and technology and exchange. There are currently local chapters in Morocco, Algeria and Tunisia.

The objective of the delegation was to promote and deepen relations between U.S. investors and their local counterparts in emerging markets and develop local talent in Morocco and throughout the Maghreb region. The main focus was innovation and the program they delivered included pitch sessions and mentoring workshops to promote the most promising entrepreneurs in Morocco. Over fifteen promising startups presented their projects and several young entrepreneurs participated in individual mentoring meetings. The delegation also organized panel discussions and mentoring sessions involving angel investors with local institutions.

Members of the delegation were entrepreneurs and investors in the technology of Silicon Valley in addition to representatives from across the United States, including Miami, New York and Detroit (Michigan), home to the largest Arab-American investors.
The U.S. delegation presented the Award of Innovation to the young Moroccan entrepreneur Yassine El Kachchani, founder of Flexcible, a Moroccan company in the software development. The winner presented an original concept of mobile applications for catering companies in Morocco. Thanks to this award, Mr. El Kachchani will benefit from a three- month training and mentoring program at TechTown incubator in Detroit, Michigan. The Innovation award is a joint contribution of TechTown, Wayne State University, the American-Arab Chamber of Commerce in Dearbon and the U.S. State Department.

The Delegation also selected two young entrepreneurs among 15 start-ups for their exceptional presentation “High potential pitch session”. The two companies are: Alamjadid, a social networking site designed to connect users of social media in Morocco in Arabic, which extend to the rest of North Africa at a later stage, and the young company Salvem, a producer of ready-to-eat ethnic food for European and North American markets.

Driss Temsamani, Head of Business Intelligence at Citigroup based in the US who participated in the delegation shared the following feedback with us on the experience: “Acting as Citizen Ambassadors, our primary mission was to foster and deepen relationships between the U.S. and the Maghreb countries during the height of the Arab Spring and the fluid geopolitical landscape of the region. The first country we visited was Morocco, where Ambassador Samuel L. Kaplan gave the delegation an overview of the country’s investment and political climate. We then proceeded to conduct several one-on-one entrepreneur mentoring sessions, startups’ business plans pitches and institutional and NGOs workshops. We also hosted business angel roundtables and mentoring sessions with local institutions that mentor entrepreneurs in Morocco. Lastly, we held a Success Stories Town Hall at the Techno-Park in Casablanca with Ahmed Reda Chami, Morocco’s Minister of Industry, Commerce, and New Technologies. While Morocco, Algeria and Tunisia manifested different business regulatory landscapes and market opportunities, there was a common entrepreneurial theme that energized members of the delegation who showed a high level of interest in continued mentoring, best practices sharing and promoting investments in the Maghreb region.”