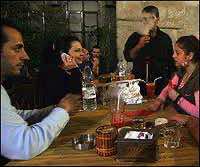 Some people are just stubborn. They keep up with their harmful behavior no matter how hard we try to advise them; well, this is a real story that clarifies how frivolous some folk can be.

It all started during Ramadan. There is a so called “Women’s Club” two steps away from where I live. This building is located in a calm area of my peaceful neighborhood, and it rarely opens since women have bigger fish to take care of during the week.

Anyways, whenever I’m on my way back home from Taraweeh prayer, I see young boys sitting at the door of the club smoking or doing drugs, and they’re often accompanied by girls who obviously look like harlots.

I felt sorry for them, and I wondered how a human could  be so vulgar during this holy month, which is the perfect opportunity to ask Allah for forgiveness and get rid of vices. But to some people, everyday looks the same.

However, I’m not here to judge, everybody is free to do whatever they want, right? But, your ‘freedom’ zone is limited when you step into someone else’s zone, and that’s exactly why I noticed, because these boys didn’t keep their nuisance to themselves.

The smoke of weed spread all over the place, any passer-by could smell it, and the loud music coming out of their mobiles, plus the cruel tone they used when talking to each other didn’t let anyone to sleep; they always stay there from dusk till dawn. I was like: Why don’t they take their business to the woods nearby? They have no respect for themselves, how can they respect someone else?

All dwellers complained about their impolite attitudes. They kept their eyes off what was going on at the beginning, hoping maybe this behavior would stop, but it didn’t seem to.

So, they addressed friendly verbal warnings to these young bullies whenever it was possible, but the response was of continuous mockery and more insolent acts.

When all smooth attempts to resolve this issue had failed, residents found themselves with one choice left that could put an end to this drama. They called the cops and told them the whole story.

Later on, the police arrived, and set a trap. One night, the entire crew was caught red-handed doing the usual dirty business. They were arrested of course. Some of them are still in detention waiting trial. Others were sent to a disciplinary center.

After what happened, people felt secure again, and nobody ever dared to smoke even a cigarette beside that club. It’s now called “The curse of scumbags”.

Oussama Hamama is a contributor to Morocco World News