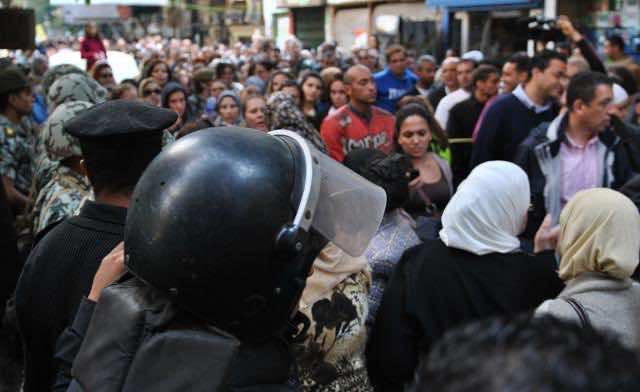 Egypt’s voting continues for a second day on Tuesday, after high turnout and a peaceful atmosphere on Monday in a parliamentary election that could loosen the army’s grip on power and sweep long-banned Islamists into the legislature.

Egyptians swarmed to the ballot box peacefully in their first election since a popular revolt toppled former president Hosni Mubarak, confounding fears of violence after a week of riots in which 42 people were killed. Up to 40 million voters are being asked to choose a new parliament.

The military will retain executive power for now, but the election will resuscitate a parliament that had acted as no more than a rubber stamp for Mubarak, who choked political life during his 30-year tenure.

“It was no use to vote before. Our voices were completely irrelevant,“ Mona Abdel Moneim, one of several women who said they were voting for the first time, told AFP in the Shubra district of Cairo.

“We were surprised that people turned out to vote in large numbers, thank God,” Abdel Moez Ibrahim, who heads the High Judicial Elections Commission (HJEC), told reporters, adding that there had been no security problems.

The United States, which has urged its longtime allies in Egypt’s military to make way swiftly for civilians rule, said early reports on the first day of voting were “quite positive. “

The peaceful voting was a happy outcome after a week of clashes between police and demonstrators seeking an end to military rule turned central Cairo into a battleground resembling the scenes during the uprising against Mubarak.

The Muslim Brotherhood’s party and other Islamists expect to do well in the parliamentary election, but the outcome is difficult to predict under a complex and unfamiliar voting system of party lists and individual candidates. Voting will be staggered over the next six weeks.

“The Muslim Brotherhood are the people who have stood by us when times were difficult,” said Ragya el-Said, a 47-year-old lawyer in Alexandria, a stronghold for the Brotherhood. “We have a lot of confidence in them.”

“I have hope this time,” Amal Fathy, a 50-year-old government employee who wears the Islamic veil, as she patiently waited inCairo to vote, told The Associated Press. “I may not live long enough to see change, but my grandchildren will.”

Political transformation in Egypt, the most populous Arab country, will reverberate across the Middle East, where a new generation demanding democratic change has toppled or challenged the leaders of Tunisia, Libya, Syriaand Yemen.

Parliament’s lower house will be Egypt’s first nationally elected body since Mubarak’s fall and those credentials alone may enable it to dilute the military’s monopoly of power.

The generals are already under pressure from young Egyptians who have returned to the streets in frustration at the slow pace of the transition to democracy. The movement led by protesters camped out in Tahrir Square is unlikely to disappear soon.

A parliament with a popular mandate could compete for authority with politician Kamal Ganzouri, named last week by the army’s ruling council to head a cabinet, which he hopes to unveil by Thursday.

“There is a chance of tension between parliament and Ganzouri, and the military council, and between all three of these and the revolutionary factions in the Egyptian squares,” said Egyptian political analyst Nabil Abdel Fattah.

Despite a host of reported electoral violations and lax supervision exploited by some groups, election monitors reported no systematic Mubarak-style campaign to rig the polls.

The Muslim Brotherhood and its Islamist rivals made sure their party workers were on hand outside polling stations to nudge confused voters towards their candidates.

“I’m a Muslim but won’t vote for any Islamist party because their views are too narrow,” Eman al-Khoury, 53, told AP as she looked disapprovingly at Brotherhood activists handing out campaign leaflets near an Alexandria polling station, a violation of election rules. “How can we change this country when at an opportunity for change we make the same dirty mistakes.”

“At least they are not giving people fruit inside the polling station,” said Mouna Zulffakar, of the Egyptian Organization for Human Rights, noting widespread breaches of a ban on campaigning near polling stations.

Independent U.S.observers said there had been a high turnout, with no violence or irregularities, State Department deputy spokesman Mark Toner said.

“What they’ve been able to see so far has been quite positive,” Toner told reporters in Washington.

Long lines failed to deter many Egyptians who believed their votes would matter for the first time in their lives.

“I’m voting for the future of Egypt,” declared Yussuf, a 25-year-old software engineer in the al-Raml district of Alexandria, Egypt’s second biggest city and a major Mediterranean port.

“This is the first free election in our country. I hope it will be the first fair election,” he told AFP.

“We must take part, we must vote, even if we stand here for five hours, so that Egypt can go forward,” said Hoda Abdel Hamid, 43, queuing in Cairo’s working-class Shubra district. “I am voting for the future of my children.”

After two days of voting in the first stage of the elections for the lower parliament, other cities and regions will follow on Dec. 14 and Jan. 3.

After these, another round of voting will take place from Jan. 29 for the upper house of parliament, and presidential elections are to be held by no later than the end of June.

Mubarak, who is on trial for murder and corruption along with his two sons, is expected to be following events from a Cairo military hospital where he is reportedly being treated for cancer.