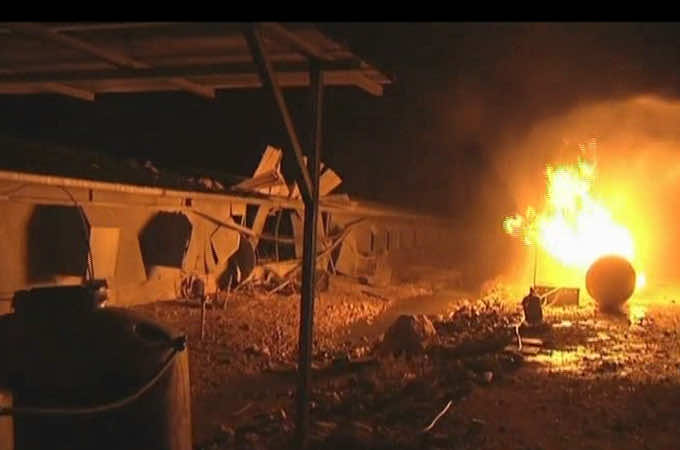 Israel has fired several missiles into the southern Lebanese town of Ayta Shaab, in response to the shooting of Katyusha rockets from Lebanon into northern Israel, according to the Lebanese National News Agency.

The NNA said the Israeli rockets caused material damage only when they landed on Lebanese territory early on Tuesday. No casualties or major damage were reported on the Israeli side and no one immediately claimed responsibility for the attack.

A Lebanese army spokesperson said: “We know that a rocket was fired from the region of Rmeish and we are investigating.”

The Israeli army said at least two of the rockets landed on Israeli soil, and that Israeli guns shelled the area where the fire had originated.

The army said it did not expect Tuesday’s incident to touch off a wider conflict with Lebanon. In a statement, however, it said it regarded the attack as “severe” and held the Lebanese government and army responsible for preventing rocket fire atIsrael.

The UN peacekeeping force in Lebanon (UNIFIL) also confirmed the attack and urged maximum restraint to prevent an escalation.

“UNIFIL radars detected firing of at least one rocket into Israel shortly after midnight last night from the general area of Rumaysh in south Lebanon,” it said in a statement.

“It is imperative to identify and apprehend the perpetrators of this attack and we will spare no efforts to this end working in cooperation with the Lebanese army,” he said, adding that additional troops had been deployed.

According to the NNA, Lebanese army units, in coordination with UNIFIL, have found the rocket-launching site from which the rockets were fired, in the area between Hnein, Ain Ebel, and Rmeish.

By mid-morning on Tuesday, Israeli warplanes were spotted flying over southern Lebanon.

Israeli military radio, citing army officials, said the rocket fire was likely the work of a small Palestinian or Islamist group rather than Hezbollah.

The radio added that Israeli military officials had stressed their desire to avoid an escalation and said that the response to the rocket fire would be “limited and selective.”

None of the rocket attacks has caused serious casualties.

The last incident at the Israeli-Lebanese border dates back to August 1, when soldiers from the two countries exchanged fire along the the Blue Line, the UN-drawn border.

In May 2011, Israeli troops killed 10 people and wounded more than 110 others on the border in southLebanonduring a protest to mark the anniversary of the 1948 creation ofIsrael, which Palestinians term the “naqba,” or catastrophe.

In August 2010, two Lebanese soldiers, a Lebanese journalist and an Israeli soldier were killed in a brief border clash touched off by Lebanese army fire towards an Israeli military base after the former said Israeli soldiers had crossed the border into Lebanon.

Overall, however, the border has been largely quiet but tense since the 2006 war, which was sparked by a deadly cross-border attack by Hezbollah on an Israeli military patrol.

Israel launched a massive assault on Lebanon in response, destroying its infrastructure and killing approximately 1,200 Lebanese. 160 Israelis were also killed.

The conflict ended with a UN-brokered truce that sent thousands of  Lebanese troops and international peacekeepers to south Lebanon.