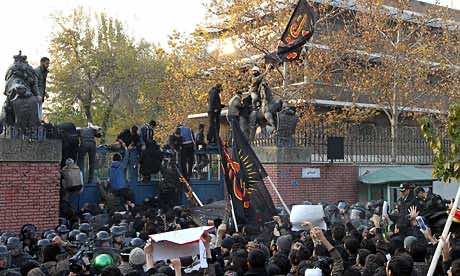 Iranian protesters stormed the British embassy and another British diplomatic compound in Tehran on Tuesday, dramatically raising tensions with the West in a confrontation over the Islamic republic’s controversial nuclear program.

More than 20 protesters clambered over the walls of the embassy in the centre of the capital, ransacking offices, smashing windows and tearing down the British flag before Iranian police entered and stopped them, an AFP journalist at the scene reported.

In the second British diplomatic compound, in Tehran’s north, between 100 and 300 protesters burst in and occupied the property, which houses schools and residences, according to Iranian media.

The situation there was not immediately clear. The state news agency IRNA said the protesters had foreigners there in their control – that they were described as “protecting.”

An official in the British embassy told AFP all British diplomatic staff were safe and accounted for.

The British Foreign Office expressed outrage at the incursion into its embassy, saying it was “utterly unacceptable and we condemn it”.

Senior Foreign Office officials have spoken to the Iranian charge d’affaires in London “to urge the Iranian authorities to act with utmost urgency to ensure the situation is brought under control”, a spokesman said.

The ministry updated its travel advice on its website to read: “During a demonstration on 29 November the British embassy in Tehran was attacked, entered and set on fire.

“We advise all British nationals in Iran to stay inside and keep a low profile. Further advice will follow.”

Iranian police, after initially doing little to stop the protesters, clashed on Tuesday with hard-line students in front of the British embassy compound in central Tehran and fired tear gas to disperse the crowd, the semi-official the semi-official Fars news agency reported.

Police also secured the release of six employees of the British embassy compound in who had been taken hostage by the students earlier in the day.

Protesters inside the embassy grounds were shown live on Iranian state television throwing stones at windows, breaking them, and one was seen climbing the wall with a looted portrait of Britain’s Queen Elizabeth II. Others threw embassy papers into the air.

At the northern compound, IRNA reported that protesters had carried off “classified and espionage documents” and also replaced the British flag there with the Iranian flag.

The scenes – which recalled the 1979 storming of the U.S. embassy that led to the rupture of U.S.-Iranian diplomatic ties – seriously added to an intensifying showdown between Iran and Western nations.

Iran on Monday passed a law to kick out Britain’s ambassador within the next two weeks and reduce diplomatic relations to the level of charge d’affaires because of the new sanctions.

Britain has said it will act “robustly” if Iran’s foreign ministry complies.

Its sanctions were announced in conjunction with the United States and Canada. EU foreign ministers on Thursday are expected to reveal new sanctions against Iran.

The European Union and the United States said Monday they were considering extra measures to pressure Iran on its nuclear activities.

The United States and its allies suspect Iran is seeking to build an atomic arsenal – a fear crystallized in a report by the U.N. nuclear watchdog this month that strongly suggested Tehran had researched nuclear warheads.

Israel, which views Iran as its biggest threat in the Middle East, is considering air strikes on Iranian nuclear facilities, according to recent Israeli media reports.

Iran has repeatedly denied its nuclear program is anything but for peaceful, civilian purposes. It has warned it would respond to any attack by raining missiles on Israel and Turkey.

Iran is already subject to four sets of U.N. sanctions designed to pressure it to halt its uranium enrichment activities, as well as the unilateral Western sanctions.