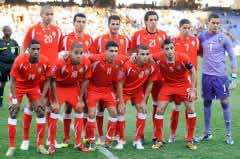 CAF U-23 Championship host nation Morocco claimed their second win in as many games courtesy of a 1-0 win over Algeria in a fiery Maghreb derby match played on Tuesday night in Tangiers. Both teams started the match on three points from their last matches victories showed from first whistle that they were out searching for more points.

Algeria were without suspended Mehdi Benaldjia , scorer of their winning and only goal against Senegal but they showed sharpness all the same while but it was the Moroccans who created the first real scoring opportunity when Yacine Qasmi sent in a delightful cross from the right and Abdelaziz Barrada got to in but could not steer it on target from five meters out.

A feisty game as expected it lived up to the billing with tackles flying and numerous free-kicks given away. In the 6th minute Imad Najah earned the game’s first caution after a rushed challenge on Mokhtar Belkhiter . A few minutes after that Qasmi got booked for a dive but Morocco were the more threatening side going forward.

Algeria then upped their game initiating some moves that had them camp briefly in the opposition’s half. Captain Mohamed Chalali was involved in most of the Algerian creative play as was Jugurtha Hamroun but the build-ups and forays into Moroccan half were not complimented by quality shooting. Youcef Belaili played himself into good positions often times dribbling well before  testing  Yassine El Kharroubi in goal for Morocco with some shots which the latter dealt with well

As the half drew to a close Barrada and Driss Fettouhi took  a couple of free –kicks for Morocco from close range and the opening goal almost came from one but the glancing header flew just wide off Yassine El Kharroubi’s post.

In 53rd minute injured Qasmi made way for Adnane Tighadouni while Algeria made double substitution with Chalali and Belkhiter replaced by Amir Sayoud and Ahmed Aouadj respectively. Tighadouni wasted no time in making his presence felt on the left flank. With his first touch he weaved passed some defenders before sending a delightful ball into the penalty box that caused commotion but was eventually cleared. His next run in the 58th minute was even better but instead of crossing Tighadouni switched the ball to his right leg and fired a shot into the bottom left hand corner of the net and brought the stadium to raptures.

Morocco then seem to take the foot off the pedal after the goal as Algeria dictated play and serveral times forced some desperate defending from the hosts. Algeria should have equalized in the 78th minute when some good inter-play found Hamroun in box but the striker blazed hit shot over the bar.

In the dying minutes of the game both sides had chances to score but Morocco hung on to victory much to the delight of the over half full stadium.