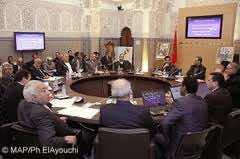 The National Human Rights Council (CNDH) presented, on Tuesday, its preliminary report on the observation of the parliamentary elections of November 25.

The Council supplied 227 observers for 15 days under the supervision of 28 provincial coordinators and created a committee of 12 members to follow-up the electoral process at the level of 92 electoral constituencies, 742 communes, 926 polling stations, 206 central stations and 82 provincial counting commissions.

CNDH scrutineers reported on the electoral process from the launch of the electoral campaign to the casting of ballots and the announcements of the results.

The preliminary report indicates that 5,171 cases of electoral posters removal were witnessed, of which 80% were performed by voters, adding that the analysis of the reports tend to show that this act shows the dissatisfaction of voters with the candidates.

Cases of verbal and physical violence reported by the CNDH amounted to 372 cases, noting that verbal violence represents 91.3% of overall cases.

CNDH’s observers noted that the process of counting and collating took place generally in a normal atmosphere.