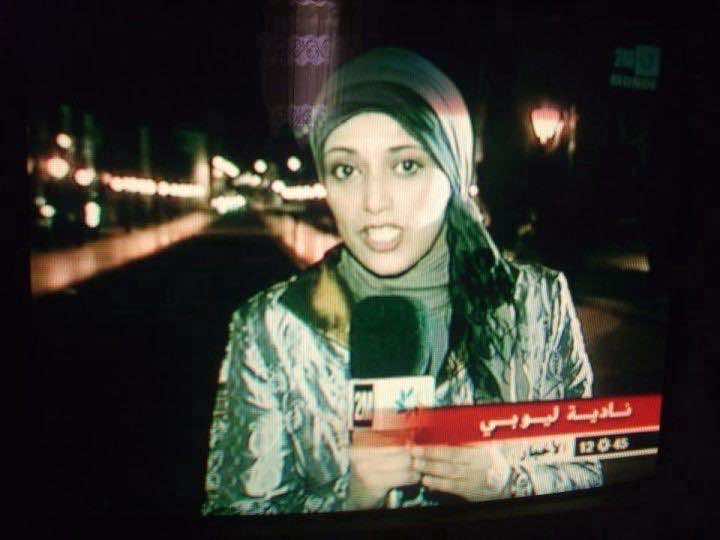 The image of Moroccan news reporter, Nadia Lyoubi, wearing the hijab (veil) while reporting on the results of Morocco’s elections went viral on the internet. In a few minutes thousands of Facebook users shared this picture on their walls. Some of them interpreted this occurrence as the results of the victory of the PJD and the ensuing adaptation of 2M executives to the religious orientation of the new government. Nidal Chebbak, Morocco World News’ reporter in Fez, wrote a story about the sudden appearance of Nadia Lyoubi, raising a couple of questions about the reasons lying behind it.

I think that Moroccans are certainly not naive to that extent of feeling satisfied and rejoiced by seeing on their TV screens a news reporter wearing the hijab. They will not be easily misled by a superficial change, though unlikely to occur, in the costumes and clothes of news anchors and reporters.

In fact, grooming and appearance of the broadcasters and news reporters is the last thing that interests Moroccans. Not because Moroccans do not care about clothes and elegance, but they are more preoccupied with all that is most important. We have seen in the most popular TV channels of other Arab countries that broadcasters and news reporters have different styles of dress, but still they are renowned for credible content and professional presentation.  This is what Moroccans are longing for; TV channels that respect and consider their intellectual abilities, and reporters that provide them in real time in up-to-the-minute news.

Moroccans will call it a change in media once they see varied programs and TV shows that meet their needs, and respect their diversity and socio-cultural identity. Moroccans from all stripes of life need independent media in its various forms such as radio, television, newspapers, magazines and the internet.  They are hungry for media that is free of influence of government or corporate interests; media that provides quality, unbiased coverage of the economy, health, development, education and other issues that touch the interests and main concerns of common people.

To attribute the appearance of news reporter Nadia Lyoubi, on 2M to the legislative election results and victory of the Party of Justice and Development (PJD) is to believe that 2M knew ahead of time the results of the elections. It was an all too quick judgment to suggest that as a result of the election of the moderate Islamist party, 2M executives decided in a blink of an eye to modify their firm policy, which forbids reporters to appear on the TV screen wearing the hijab, in order to be consistent with the orientations of the Party of Justice and Development.

I strongly support the fact that media should be unbiased and free from the influence of government regardless of who is in authority.

I do not think that the PJD will consider it a priority to change the clothing habits of  news reporters. The main priorities of the new government will be rather to address the acute social and economic problems of Morocco, least of which are unemployment, corruption and nepotism, to name a few.

In the press conference after the announcement of his party’s victory, Benkirane was quick to convey reassuring messages to those Moroccans who fear possible interference by the party in people’s life. In this regard, the PJD Secretary General said that nobody should fear his party. Its intentions are to improve the day-to-day life of the Moroccan people. Benkirane also made sure to send a reassuring message to the West when he stated that his government intends to build balanced relationships with Morocco’s western partners. Moroccans who entrusted the PJD with leading the new government may see in this party the ‘superman’ that will solve the complicated economic, political and social issues that the country is facing.

When I read Mr. Abdelilah Binkiran’s statements, I suddenly recalled a Berber pithy proverb that has the English counterpart as follows: «Don’t count your chickens before they are hatched». Simply put, expect no more than a usual government but this time with a fierce opposition.

I am neither pessimistic nor do I underestimate the statesmanship and diplomacy of the Party of Justice and Development. I am totally aware of the national and international challenges that are awaiting the party of Mr. Abdelilah Benkirane.

Larbi Arbaoui is a contributor to Morocco World News