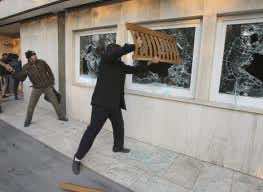 Britain is evacuating its diplomatic staff from Tehran following the storming of its embassy by Iranian protesters the day before, which sparked international condemnation.

The Foreign Office in London confirmed on Wednesday information from EU diplomats in the Iranian capital that the British staff were being withdrawn.

“In light of yesterday’s events and to ensure their ongoing safety, some staff are leaving Tehran,” a Foreign Office spokesman said.

A first group of embassy employees was already at Tehran airport about to be flown toDubai, one European diplomat told the AFP news agency. He and other diplomats said all the British embassy staff were leaving.

The diplomats had spent the night in the security of various EU embassies, notably the French mission.

Norwayhas closed its embassy in Tehran due to security concerns following the storming of the British embassy.

Hilde Steinfeld, a foreign ministry spokeswoman inOslo, said the decision to close the embassy was taken late Tuesday, but thatNorway’s diplomatic staff have not been evacuateed from the country. “They’re still in Tehran” she said.

The protesters were reflecting official anger at Britain’s decision last week to cut all relations with Iran’s financial sector as part of new sanctions unveiled in co-ordination with the US and Canada.

The storming of Britain’s embassy sparked international condemnation, including a strongly worded statement from the UN Security Council.

Ban Ki-moon, the UN chief, said during a trip toSouth Koreahe was “shocked and outraged to hear of the incident in Tehran in which demonstrators entered the British embassy, briefly abducted embassy staff and damaged property”.

It took diplomatic police several hours to free six diplomats isolated by the protesters inside a building in the diplomatic compound, the Fars news agency reported.

Inside the embassy, in the city centre, several protesters scattered documents and set them alight, witnesses told AFP.

Iran’s foreign ministry expressed “regret” over the incident, but some Iranian officials were defiant, blaming the dramatic scenes on Britain’s stance towards their country.

He said “a number of students angered by the British government’s behaviour” had carried out their actions because of “decades of domineering moves by the British inIran”.

In comments to the state news agency IRNA, the head of the Iranian parliament’s security and foreign policy committee, Alaeddin Boroujerdi, said: “Iranrespects all international laws and the Vienna Convention [on the protection of embassies] and this issue must in no way cause concern for other diplomats and embassies.”

He, too, downplayed the storming of the embassy as “a manifestation of the students’ high emotions.”

David Cameron, the UK prime minister, chaired a meeting of the government crisis committee on Tuesday to discuss the attacks which he said were “outrageous and indefensible.”

“The failure of the Iranian government to defend British staff and property was a disgrace,” he said in a statement.

“The Iranian government must recognise that there will be serious consequences for failing to protect our staff. We will consider what these measures should be in the coming days.”

Britain and the US have been leading Western moves to step up pressure on Iran over its nuclear programme, which they fear is being used as cover for the development of a weapons capability.

The looting of the British embassy and compound came before an EU foreign ministers’ meeting on Thursday that is expected to unveil new sanctions against Iran over its nuclear programme.

Iran has repeatedly denied its nuclear programme has a military component, and has warned it will respond to any military attack by raining missiles on Israel and Turkey.