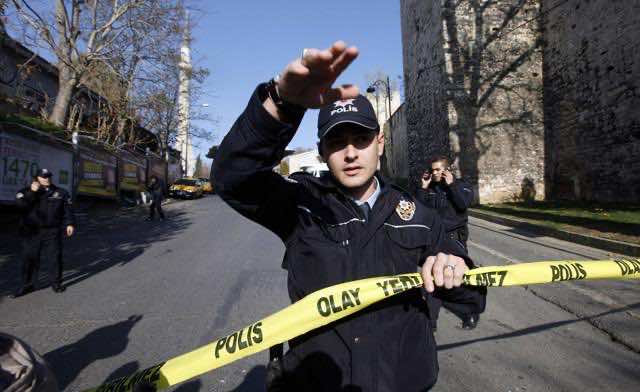 The incident happened in Sultanahmet, the heart of historic old Istanbul, which is visited by thousands of tourists every day.

The assailant opened fire around the time the first visitors would normally be arriving at the lavish palace, home of Ottoman sultans for centuries and one of Istanbul’s top tourist draws. He was killed after a one-hour siege.

“The attacker was not a Turkish citizen, he was foreign. A Libyan national born in 1975. He entered Turkey on Nov. 27,”state-run Anatolian news agency quoted Interior Minister Idris Naim Sahin as telling reporters.

Istanbul Governor Huseyin Avni Mutlu told reporters the gunman had been shot after refusing to surrender. He declined to comment on a possible motive for the attack.

Television station CNN Turk broadcast a photograph of a man, identified as the attacker, holding a rifle and wearing an ammunition belt and a backpack, standing behind a low wall. He wore a cap and a dark coat.

A coach party was disembarking to enter the gates, which had just been opened when shooting was heard inside.

A soldier and private security worker were wounded in the attack, Anatolian said.

Several ambulances had rushed to the scene, where a police cordon was rapidly set up and people were evacuated. Armed security service officers had taken up positions on the palace walls at the entrance.

Kurdish, Islamist and leftist militants are all active in Turkey.