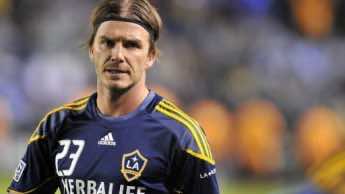 David Beckham is set to put an end to weeks of speculation in the coming days by announcing whether or not he intends to sign with French football club Paris St-Germain (PSG). Parisians are getting excited about the possible arrival of a superstar.

At the age of just 36 David Beckham has achieved an astonishing amount in his football career.

He’s played over a hundred times for his country and won the European Cup as well as domestic titles in England and Spain.  He’s also become a multi-millionaire in the process.

Now the football superstar could be set for one last challenge in Paris. The former England captain has said he will make his final decision once his overseas tour with his current club US club LA Galaxy comes to an end on December 6.

The potential arrival of a football icon is sure to have put a smile on the faces of  Paris Saint-Germain’s (PSG) marketing department.

“If you just consider the marketing point of view it could be incredible for PSG,” Michel Desbordes, a professor in sports marketing at the ISC School of Management in Paris, told FRANCE 24.

“Beckham is a brand in itself and PSG will try to leverage that brand around the world,” he said.

“If you just look at the shirt you have the symbol of the Eiffel Tower, which is famous around the world too –  and if you have Beckham wearing that shirt then obviously it would be great for sales.”

Beckham will be welcomed by fans

Given that PSG appears to be signing ‘Beckham the brand’ rather than ‘Beckham the player’ it’s perhaps understandable the move is viewed with a certain degree of cynicism.

Some have voiced concerns that signing a pin-up like Beckham simply to exploit his ability to sell shirts could provoke a backlash among fans, especially given Beckham’s best footballing days are well and truly behind him.

But Desbordes said: “I don’t think the fans will react in a negative way.. They just want to see stars play. They know how much players are paid these days. They will still be happy.”

However Desbordes did foresee a possible clash between sports manufacturer Nike – who sponsor PSG – and Adidas, who shelled out millions to be endorsed by Beckham.

“It would be huge for French football”

The French press has been buzzing with rumours of Beckham’s potential move since it was first mooted in the summer. In recent weeks the excitement has reached fever pitch.

“It would be very positive. He would bring something significant to PSG. He would focus the attention on the French league from all over the world,” journalist Ronan Folgoas told FRANCE 24.

“The first impact would be at PSG where there would be maybe 10 or 15 English journalists at every game,” said Folgoas who covers PSG for French daily Le Parisien.

“And what about his teammates? The arrival of a superstar could unsettle some of the egos already existent in the PSG dressing room.”

“There could be a problem among players but Beckham is from another world. I think every teammate would be fascinated to play alongside him,” said Folgoas.

Al Jazeera would also be certain to welcome Beckham to PSG. The Qatar-based TV network recently paid €195million for the overseas rights to show French league matches for the next six years.

Uniting Beckham withPariscould be a match made in heaven.

Beckham and his family get to live in the City of Light. He will be within easy reach of London where he hopes to represent the British team in next year’s Olympics.

PSG on the other hand gets the biggest name in world football to wear their shirt. But it might not all turn out so rosy.

“There will be pressure on Beckham, especially if he is not at the right level to play for Paris,” said Folgoas. “The disappointment would be hard to deal with. If it became a sporting fiasco it would be very hard to manage.”

If he signs, Beckham will become the highest-paid footballer in the history of French football. He has reportedly been offered an eye-watering €15million for an 18-month contract.

And the Parisian boutiques will certainly be hoping that Victoria Beckham, fashion designer and famous shopper, will help boost the stuttering French economy by paying them a few visits.

Another key factor in Paris’ favour is the recent re-opening of the quintessentially British store Marks and Spencer, where Beckham reportedly likes to buy his socks.