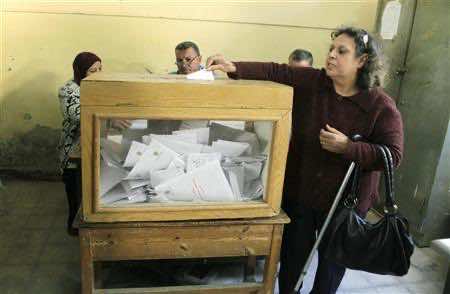 Egypt’s powerful Muslim Brotherhood on Wednesday claimed the lead in the first stage of the country’s first parliamentary elections since Hosni Mubarak’s fall.

The movement’s Freedom and Justice Party said initial results showed its coalition ahead, followed by parties belonging to the hardline Islamist Salafi movements, then a coalition of secular movements in third.

The Muslim Brotherhood said the parliament that emerges from Egypt’s landmark elections should form a government, setting the stage for possible confrontation between Islamists and the ruling generals who have only just named a new prime minister as the Tahrir sit-in protest against the military council entered its 12th day on Wednesday.

The results of the first phase of the three-stage poll which could bring the Muslim Brotherhood closer to power were due to start coming out on Wednesday, but the military council which took over from ousted President Hosni Mubarak has yet to step aside.

Millions of voters went to the polls in a mostly peaceful two-day vote, though the calm was shattered on Tuesday night when nearly 80 people were wounded in violence focused around a Cairo sit-in protest by activists demanding an end to army rule, according to Reuters.

According to the independent daily al-Shorouk, in Cairo “the first signs show the Freedom and Justice Party with 47 percent of the votes, and 22 percent for the Egyptian bloc,” a coalition of secular parties.

The election for Egypt’s lower house is due to conclude in early January but early results were expected to trickle out on Wednesday after a high turnout and only minor infringements were reported.

State television broadcast live footage of the vote count across Egypt, which has not seen an election this free in the decades since army officers overthrew the monarchy in 1952.

Though the Muslim Brotherhood went into the polls stronger than nascent secular parties, analysts say it is hard to predict the outcome given that most of the electorates are casting their ballots for the first time.

Election monitors reported logistical hiccups and some campaign violations but no serious violence to disrupt proceedings. Election posters and banners festooned towns and cities while judges officiated under the eye of troops, police and election monitors.

The outcome of the election in one of the Middle East’s most influential powers will help shape the future of a region convulsed by uprisings against decades of autocracy.

Though it did not start the Egyptian uprising, the Muslim Brotherhood has emerged as a major beneficiary of the revolt. The group, outlawed by Mubarak and his predecessors, is now in sight of a role in shaping the country’s future.