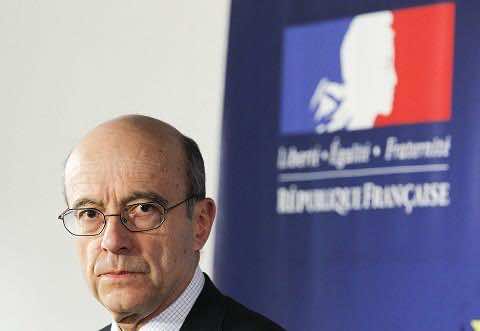 French Foreign Minister, Alain Juppe, congratulated on Wednesday new Moroccan Chief of government, Abdelilah Benkirane, and expressed the will of his country to work closely with Morocco.

In a statement carried by the Maghreb Arab Press News Agency, Alain Juppe, expressed “France’s will to work closely with Morocco on the path to development and progress.”

On Tuesday King Mohammed VI received in Midelt (central Morocco), Abdelilah Benkirane, Secretary General of the Justice and Development Party (PJD), and appointed him as Chief of government (Prime Minister).

Spokesman of the French Foreign Ministry, Bernard Valero, said that following the nomination of Benkirane, Jupe in a phone conversation with his Moroccan counterpart, expressed his “wishes of success” to the leader of the Party of Justice and Development (PJD).

During this conversation, both French Foreign Minister and the Moroccan Chief of government exchanged their intention to hold a meeting in Morocco.

Juppe said he intends “to visit Morocco soon. The Prime Minister (of Morocco) told him he will be happy to receive him during this visit,” said the spokesman in a statement.

“France hopes that this election will be a further step in Morocco’s march on the path drawn by the King of Morocco who made the initiative and launched major and key reforms,” he told the press.

With 107 seats in the 395-seat House of Representatives, the moderate Islamist Party won a historic victory in Morocco’s legislative election held last Friday.

This is the first time that the Justice and development party (PJD) will be given the responsibility of heading the government, after it spent 14 years in opposition. In its first participation in the elections in 1997, it obtained 8 seats.

In his early statements right after the announcement of the provisional results of the parliamentary elections, Secretary General of the PJD, Abdelillah Benkirane, told the press, that his party will uphold Morocco’s longstanding relations with the US and the EU.

“What we claim, today, is to work together, in a democratic way, within the framework of balanced ties,” he said.