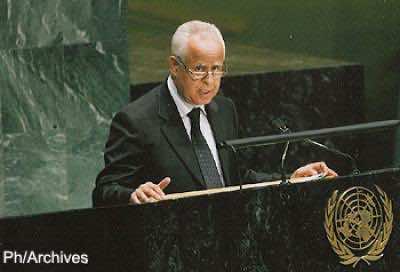 Morocco reiterated, on Wednesday in New York, support for the Palestinian Authority’s bid for statehood recognition at the UN and called for the resumption of the peace process with a view to enabling the Palestinian people to regain their legitimate right to an independent state with eastern Al-Quds as its capital.

Speaking during a meeting of the UN General Assembly on the Palestinian question, Morocco’s representative Ambassador Mohamed Loulichki recalled that Palestine was recently admitted at the UNESCO, calling upon the UN to follow suit.

He said Morocco’s commitment to supporting the Palestinian cause was once again demonstrated in a message sent by HM King Mohammed VI to the Chairman of the Committee on the Exercise of the Inalienable Rights of the Palestinian People, Abdou Salam Diallo, on the occasion of the commemoration, Tuesday in the headquarters of the United Nations Organization, of the International Day of Solidarity with the Palestinian people.

The Ambassador added that in the message, the Sovereign expressed Morocco’s steadfast commitment to continue to make every possible effort to alleviate the suffering of the Palestinian people through providing humanitarian aid and using the Kingdom’s diplomatic service and various international forums to sensitize the international community across the world about the tragedy endured by the Palestinians.

Palestine’s bid to join the UN as a fully-fledged member is the result of the stalling peace process and the culmination of efforts undertaken to set up national institutions that are able to fulfill the responsibilities arising from the establishment of a state.

The Moroccan diplomat, on the other hand, deplored the non-resumption of negotiations and denounced Israel’s colonization policy and its refusal to adhere to international peace initiatives.

In the strongest terms, Morocco’s Ambassador condemned the Israeli colonization of the holy city of Al-Quds and all attempts that aim at distorting its religious and civilisaitonal character.

Loulichki also stressed the need for more international pressure on Israel to compel it to end its siege on Gaza.