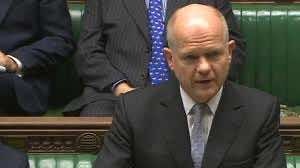 Foreign minister announces move after attack on UK’s embassy in Tehran by a crowd of Iranian protesters.

Britain has ordered the immediate closure of Iran’s embassy in London and closed its own embassy in Tehran after it was stormed by protesters.

“The Iranian charge [d’affaires] in London is being informed now that we require the immediate closure of the Iranian embassy in London and that all Iranian diplomatic staff must leave the United Kingdom within the next 48 hours,” British Foreign Minister William Hague told parliament on Wednesday.

“We have now closed the British embassy in Tehran. We have decided to evacuate all our staff and as of the last few minutes, the last of our UK-based staff have now left Iran.”

Hague also announced that Iranian ambassadors had been summoned in countries across Europe to receive strong protests over the storming of the embassy.

It marks “a complete split in diplomatic relations, not cut off completely but [downgraded to] the lowest level,” Simmons said.

Iran’s foreign ministry, meanwhile, said shortly after Hague’s announcement that the move to close the embassy was “hasty” and that Iran would be taking “further appropriate action”, according to state television reports.

Britain has voiced outrage over the ransacking of its diplomatic premises in Tehran on Tuesday by hardline students and Basij armed men in revenge for new British and Western sanctions over Iran’s nuclear programme.

“If any country makes it impossible for us to operate on their soil they cannot expect to have a functioning embassy here,” Hague said.

Mindful of the 1979 seizure of the US embassy in Tehran, when radical students held 52 Americans hostage for 444 days, Britain waited till all its two dozen diplomatic staff and dependents had left the country to announce its move.

Hague said it was “fanciful” to think the Iranian authorities could not have protected the embassy, or that the assault could have taken place without “some degree of regime consent”.

The diplomatic crisis is the worst dispute between Britain and Iran since full relations were restored in 1999, 10 years after Ayatollah Ruhollah Khomeini’s fatwa to kill author Salman Rushdie for his book “The Satanic Verses”.

“It’s rock bottom as far as Anglo-Iranian relations are concerned,” said Ali Ansari, director of the Institute for Iranian Studies at St Andrews University in Scotland. “The Iranians have a mountain to climb. I don’t think they fully understand how difficult it is for them now.”

“What you are moving into is a period of containment and quarantine.”

Hague said European Union foreign ministers would discuss a possible co-ordinated response to the embassy attack at a meeting in Brussels later.

The EU ministers would discuss “further action which needs to be taken in the light of Iran’s continued pursuit of a nuclear weapons programme,” he said.

Germany and France on Wednesday also recalled their respective ambassadors to Iran for “consultations” over the storming of the British embassy.

Al Jazeera’s Simmons reported that France was pushing for sanctions to be imposed on Iran’s oil exports, but that the initiative was meeting resistance from other European governments.

“The reason this is so contentious is that Iran is such a big OPEC producer and this could harm economies in Europe,” he reported.

“This is going to be a fraught meeting inBrussels on Thursday.”

Britain, however, will support the embargo, diplomatic sources told the Reuters news agency on Wednesday.

“Now that the UK has downgraded diplomatic relations with Iran, it will support increased sanctions … and would likely go ahead with those sanctions unilaterally or with France and Germany,” the diplomatic source said, referring to the ban on Iranian crude oil imports.

Britain and other Western nations accuse Iran of seeking to develop nuclear weapons but Tehran insists its programme is purely for peaceful purposes.

Britain announced last week that it was halting all transactions with Iran’s financial system, including its central bank.

Iranian officials this week retaliated by passing a law kicking out the British ambassador and downgrading diplomatic ties.

The attack also exposes widening rifts within Iran’s ruling elite over how to deal with the increased international pressure as sanctions take their toll on the already stagnant economy.

The protest appeared to be a move by the conservatives who dominate parliament to force President Mahmoud Ahmadinejad to heed their demand to expel the British ambassador. Ahmadinejad and his ministers have shown no willingness to compromise on their refusal to halt Iran’s nuclear work but have sought to keep talks open to limit what sanctions are imposed.

“This incident was planned by elements who are not opposed per se to negotiations but want to stop them merely because of their own petty political struggles,” said Trita Parsi, a US-based expert on Western-Iranian relations.

“The push to get the UK ambassador out came from parliament which is headed by Ali Larijani,” Parsi said. “When Larijani was chief nuclear negotiator Ahmadinejad carried out a similar campaign against negotiations.”