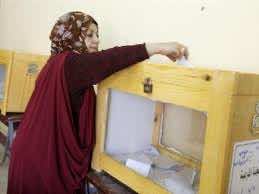 Egypt awaited results on Thursday from its first election since its February revolution which are set to confirm moderate Islamists as the dominant force, but with a strong showing from hardliners.

The Muslim Brotherhood, a moderate Islamist movement banned for decades by Hosni Mubarak, has emerged from the shadows since the fall of the autocrat and has forecast its party will take at least 40% of the vote.

The battle for second place had been seen as between secular liberals and hardline Islamists who follow the strict Salafi brand of Islam, with local media indicating the latter might prevail in the new parliament.

“Al-Nur, the surprise of the moment,” headlined the independent Al-Shorouq daily on Thursday, referring to the main party of the Salafists whose members follow a strict form of Islam dominant in Saudi Arabia.

Estimates in the press indicated they would win around 20 percent of the vote when results are published later Thursday at 19:00 for the areas that voted on Monday and Tuesday – about a third of all constituencies.

Millions of Egyptians embraced their new democratic freedoms in the capital Cairo and second-city Alexandria earlier this week in the first phase of multi-stage parliamentary elections.

Analysts warn against reading too much into only the first stage of a parliamentary election that will last until March, but the results will reveal the political trends in a country that has not had a free vote in 60 years.

The Brotherhood’s Freedom and Justice Party says it strives for a “civil state, defined as a non-military non-religious state… that respects human rights” according to its political programme.

Leaders have repeatedly stressed their commitment to multi-party democracy and inclusiveness, and pledged to ensure freedoms.

The group has been officially banned since the 1950s, but it counts hundreds of thousands of members and is known for its vast network of social and religious outreach programmes, as well as its stand against corruption.

“The Brotherhood beats the drums of victory,” headlined the independent daily Al-Shorouk on Thursday.

Al-Nur was initially part of the Democratic Alliance coalition led by the Muslim Brotherhood, but they left to form their own Islamic Alliance, which calls for a strict interpretation of Islamic law in economic and social life.

“The fear is that if the Islamist forces dominate the new parliament, that could lead to an undemocratic system, and one that is authoritarian in the name of religion,” said Hassan Nafaa, a professor of political science at the University of Cairo, quoted by Al-Shorouq.

“We don’t want to replace Mubarak with a theocratic and authoritarian regime,” he added.

Rabab al-Mahdi, professor of political science at the American University in Cairo, said a large Salafist block in parliament “could also expose the divisions within Islamist movements.”

“The Islamists are far from being one homogenous group,” she told AFP.

US Secretary of State Hillary Clinton on Wednesday urged Egypt to continue its transition to democracy “in a just, transparent and inclusive manner.”

Last week, 42 people were killed and more than 3 000 injured in violent protests against the interim military regime that took power after the fall of Mubarak.

Pro-democracy activists accuse it of trying to consolidate its influence and many fear the military will prove unwilling to fully hand over power to the new civilian leaders.

The vote on Monday and Tuesday in Cairo and Alexandria and other areas was the first of three stages of an election for a new lower house of parliament. The rest of the country follows next month and in January.

After each round, there will be a run-off vote, and then a further three rounds of voting for the upper house of parliament from January.

It remains unclear how the new parliament will function and how much power it will be given by the Supreme Council of Armed Forces headed by Field Marshal Hussein Tantawi, Mubarak’s long-time defence minister.