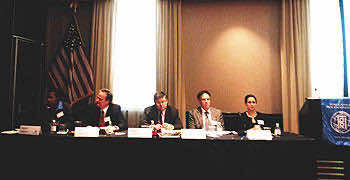 The free and transport holding of the parliamentary poll, part of the ongoing political and constitutional reforms undertaken by Morocco, is a victory for the democratic vision of King Mohammed VI, said on Wednesday participants at a conference, organized in Washington by the U.S. think tank “Foreign Policy Research Institute” (FPRI) and the “Reserve Officers Association.”

The outcome of the election, marked by the success of the Justice and Development Party (PJD), also confirms Morocco’s commitment to moving forward in the ongoing democratic reform process, pointed out Bruce Maddy-Weitzman, specialist on the Maghreb, African and Middle Eastern Studies.

Monarchy in Morocco has always been the pillar of the Moroccan society and constitutes, for that reason, the guarantee of stability in the country, said the pundit, who has many works on the region’s countries.

William Lawrence, director of the North Africa Project at the “International Crisis Group,” an independent, non-profit NGO committed to preventing and resolving armed conflicts, also welcomed, for his part, the excellent organization of the legislative poll of November 25.

Lawrence put forward the outstanding progress made by the Kingdom in freedom of expression and the press, as well as in the area of human rights.