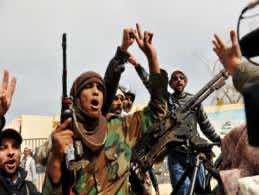 Fawzi Abdelali said the fighters from all of the combat brigades who fought on the front line would join the ranks of the security forces of the defence and interior ministries.

Abdelali, who was speaking at a function marking the completion of training of a batch of former rebels by French police, gave no time frame for their adhesion.

The minister said the integration plan would be announced officially next week, adding the North African country planned to rehabilitate 200,000 fighters over the long term.

Tens of thousands of Libyan civilians took up arms when the anti-Kadhafi rebellion erupted in February.

They captured city after city over an eight-month period before finally overthrowing his 42-year-old regime. The dictator himself was captured and killed on October 20.