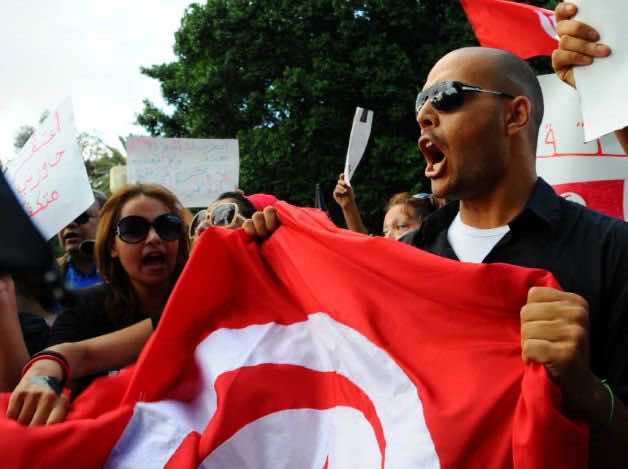 According to AFP estimates, between 2,000 and 3,000 students, teachers, miners and others assembled outside the Bardo Palace, where Tunisian lawmakers are gathering to draft a new constitution.

The protest comes partly in response to ongoing demonstrations at a university outside the capital Tunis, where Islamists have been calling for women students to wear head scarves and gender segregation in classes.

University professors at the protest chanted “No to extremism” and “Hands off the teachers”, among other slogans.

Students held placards protesting headscarves, known locally as niqabs. “Neither mini-skirts nor niqabs” and “If you want to wear the niqab, do it at home”, were among the messages spotted.

Islamism is a political movement incorporating religous beliefs into governance. Leaders from moderate Islamist parties have been winning large blocs of votes in elections after the fall of dictators in the Arab Spring revolts.

In Tunisia, the Islamist Ennaahda Party won the most votes in the October 23 elections, the country’s first since the revolution that ousted a staunchly secular regime along with president Zine el Abidine Ben Ali in January.

Also at Thursday’s demonstration were miners who pitched tents and said they would stay until their demands are met. They are angered over what they say were rigged hiring practices at a mining recruitment firm.

We didn’t make a revolution for that,” communist leader Hama Hammami said. “People are hungry and corruption is rampant.”

Other demonstrators yelled at the palace, saying politics should not be held behind closed doors.