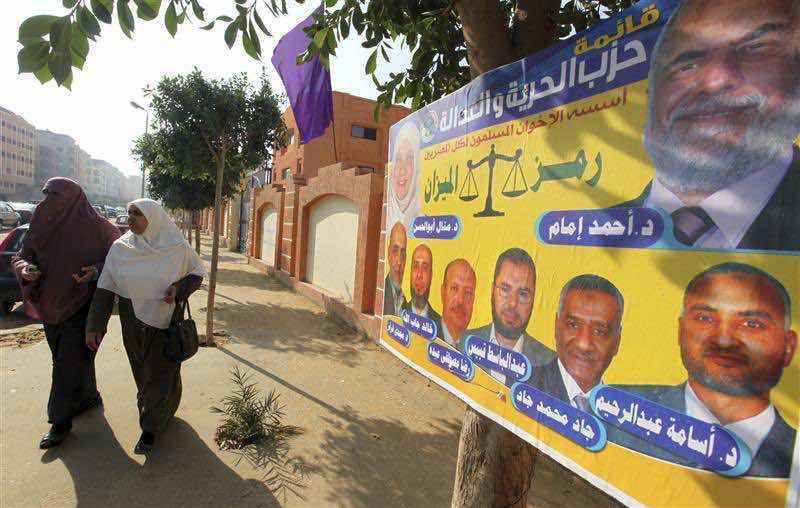 Egypt announced a second delay Thursday for results of its first election vote since its February revolution which are set to reveal hardline Salafi Islamists as important new power brokers.

Millions of Egyptians embraced their new democratic freedoms in the capital Cairo and second-city Alexandria earlier this week in an orderly and peaceful first phase of multi-stage parliamentary elections.

Egypt’s election commission chief Abdel Moez Ibrahim said a large turnout — forecast as high as 70 percent — meant the publication of results had to be pushed back another day to Friday.

The counting of votes is still going on in a number of districts because of the large number of voters who took part in these elections,” he was quoted as saying by the official MENA news agency.

The results are expected to show the Muslim Brotherhood, a moderate Islamist movement banned for decades by Mubarak, as the dominant force after it said its party had taken at least 40 percent of the vote in preliminary counting.

The battle for second place had been seen as between secular liberals and hardline Islamists who follow the strict Salafi brand of Islam, but local media indicated the latter were poised to prevail with more than 20 percent. “Al-Nur, the surprise of the moment,” headlined the independent Al-Shorouq daily on Thursday, referring to the main party of the Salafists, whose members
follow a strict form of Islam dominant in Saudi Arabia.

Analysts warn against reading too much into only the first part of a parliamentary election, but the results will reveal the political trends in a country that has not had a free vote in 60 years.

Only a third of constituencies voted on Monday and Tuesday in the election for a new lower house of parliament. The rest of the country will follow next month and in January.

Osama Mohammed, a liberal 31-year-old with a job at a multinational company, took part in the demonstrations in iconic Tahrir Square that led to the toppling of Mubarak’s regime in February.

“It’s shocking,” he told AFP. “We always knew and expected the Muslim Brotherhood to win because they have been working on the ground with the people for years. But the Salafis were practically unknown to most of the public.”

The Brotherhood’s Freedom and Justice Party says it strives for a “civil state, defined as a non-military non-religious state… that respects human rights” according to its political program.

Leaders have repeatedly stressed their commitment to multi-party democracy and inclusiveness, and pledged to ensure freedoms.

The group has been officially banned since the 1950s, but it counts hundreds of thousands of members and is known for its vast network of social and religious outreach programmes, as well as its stand against corruption.

“The Brotherhood beats the drums of victory,” headlined the independent daily Al-Shorouq on Thursday.

The hardline Al-Nur was initially part of the Democratic Alliance coalition led by the Muslim Brotherhood, but they split to form their Islamic Alliance, which calls for a strict interpretation of Islamic law. Pictures of their candidates, clearly identifiable by their long beards, were highly visible around polling stations this week and they actively campaigned in conservative rural areas outside the capital. Al-Nur spokesman Mohammed Nour told AFP they had been subjected to “a
campaign of fearmongering and slander,” but he stresses that the party wants democracy that recognises that “sovereignty comes from God.”

On the eight-million-strong Coptic Christian community, he said: “Touching one hair on a Copt’s head violates our program.”

Hassan Nafaa, a professor of political science at the University of Cairo, was quoted by Al-Shorouq newspaper as saying that an Islamist-dominated parliament was a danger.

“We don’t want to replace Mubarak with a theocratic and authoritarian regime,” he said.

Last week, 43 people were killed and more than 3,000 injured in violent protests against the interim military regime that took power after the fall of Mubarak.

Pro-democracy activists accuse it of trying to consolidate its influence and many fear the military will prove unwilling to fully hand over power to the new civilian leaders.

It remains unclear how the new parliament will function and how much power it will be given by the Supreme Council of the Armed Forces headed by Field Marshal Hussein Tantawi, Mubarak’s long-time defense minister.

Observers say Egypt, the Arab world’s most populous nation and its cultural heartland, faces a long, highly complex and uncertain transition to democracy.