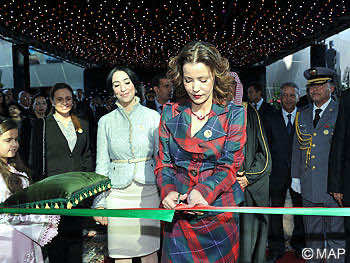 Princess Lalla Meryem presided, on Thursday in Casablanca, over the inauguration of Morocco Mall, a large shopping mall ranking among the top 5 Malls in the world.

Morocco Mall will contain 350 shops offering more than six hundred of the most sought-after international fashion and design brands, including Christian Dior, Louis Vuitton, Fendi, Ralph Lauren, Gucci, Mango, Zara, H&M, Prada, Guess, Lacoste, and GAP, among others. The space also features forty restaurants offering spectacular views of the grounds; plus a musical fountain, only the third of its kind in the world; and an enormous cylindrical fish basin containing more than a million liters of water. The basin is filled with 3,000 nautical objects from around the world, on display to visitors by way of a panoramic elevator that ascends through the water.

Morocco Mall, one of the five largest malls in the world, is expected to receive more than fifteen million visitors a year with sales approaching five billion dirhams (600 million US dollars). Plus the mall will provide 26,000 Moroccans with jobs.

Actress and singer Jennifer Lopez lands in Morocco on Thursday to participate in the opening ceremony taking place this weekend. The public can obtain invitations to attend this celebration before the mall officially opens Monday.