Morocco World News
Home News Maghreb New government in Morocco: A Jew at the Helm of the Ministry... 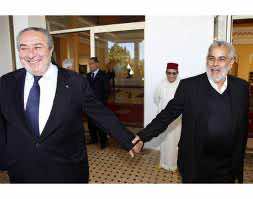 Less than a week after the victory of the Party of Justice and Development in Morocco’s legislative elections held on November 25, the newly appointed Chief of government, Abdelilah Benkirane, has started holding talks with the leaders of other political formations with the view to form a new government and start discharging the mandate given to it by the Moroccan people.

Analysts say that the parties most likely to participate in the new government are those that belong to the Democratic Bloc (Koutla) composed of the Istiqlal party of Abass El Fassi, the former Prime Minister, the Socialist Union of Popular Forces (USFP) and the Party of Progress and Socialism (PPS).

In addition to these parties, Mr. Benkirane has hinted to  the possibility that he might entrust a number of ministerial portfolios to a number of non-partisan technocrats known for their integrity, experience and competence.

“I will not hesitate to count on the experience of technocrats whom are well-known for their competence,” he said on Wednesday in an interview with the Al Massae daily.

It seems that Morocco’s new leader of government will honour his statement. According to well-informed sources in Rabat contacted by Morocco World News, Benkirane will most likely appoint Mr. Serge Berdugo, currently Ambassador at large of the King of Morocco, as the country’s minister of tourism.

If this hypothesis is confirmed, it will be the second time that Mr. Berdugo will be entrusted with the hefty responsibility of running one of the most vital sectors of Morocco’s economy. Tourism is the second greatest source of revenue in the country, after agriculture.

Through the appointment of a Moroccan of Jewish faith as the Minister of Tourism, the PJD’s Secretary General would convey a clear-cut message to the world, that with the presence of a secularist or a moderate Islamist party at the helm of political life in the country, Morocco will never give up on its culture of coexistence and fraternity with peoples of other cultures and persuasions.

The second message that Benkirane would convey to foreign investors and Moroccans alike, who might fear the allegedly rigid ideology of his party, is that an Islamist government will by no means have a negative impact in the development of tourism in the country, nor has it as a priority to impose a strict moral code on society.

Serge Berdugo was born in Meknes. He was appointed for the first time as Minister of Tourism in 1993 during the government of Mohamed Karim Lamrani. Berdugo is the president of the World Assembly of Moroccan Jewry.

Morocco’s Jewish community has dwindled from an estimated 300,000 to around 8,000 in the last four decades. But it remains the largest single community in the Arab world and has enjoyed the protection of Moroccan monarchs since the 16th century.

“Although life for the Jews in Morocco was not always one of ‘wine and roses’, it was always better than what other Jews experienced in most parts of the world. The Kingdom of Morocco bears witness to the viability of a Jewish community living peacefully in Arab country for centuries”, said Serge Berdugo in a speech delivered in New York on December 13, 2010, on the occasion of an event entitled “Two Thousand Years Of Jewish Life in Morocco: An Epic Journey.”