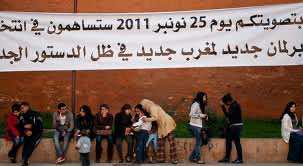 Unfortunately I’ve never been interested in politics. For example, this year, just as the majority of Moroccan youth, I don’t trust politicians.

I’m 35 and I’ve never voted. Let’s try to answer the following question: why have I never voted?

Sometimes I tell myself I should be more involved in changing my country and leading my people towards democracy. If I don’t, who will? Especially, since I’m supposed to be among the elite because of my intellectual, economic and social status.

I cannot remember the number of discussions I held with my friends and the number of times I heard or asked this question: are you going to vote?

I used to hear the following answer too: of course not, I never did. Why would I do so this time?

I can be sure of something; I’m an engineer. In my social class far less than 1% vote. It’s a real shame. Shame on who? On me, on him, on us, on the government; who knows?

Why I never vote? Simply because it’s the same story, the same faces, the same programs, the same masquerades when political parties and their candidates for election campaign.

I really was feeling bitter all these years because of my negligent behavior towards the future of my country, of my people.

I feel some remorse, because after all, somebody has to begin, to spark change, but how?

Is it a solution to abstain from voting? Is that how we will punish the government and the politicians? I realized with age and experience that it’s a very simplistic and naïve approach, the approach of holding government responsible for everything. People think that way because they believe the government and politicians are “omnipotent”, that they have all the power to do everything they want; for the majority of the populace it’s a matter of “will” no more than that.

Morocco has taken, a few months ago, huge steps towards democracy. It all began with the speech of his majesty, announcing major reforms of the constitution, giving more freedom and independence to the parliament and the government.

So I decided to get rid of my negligent attitude and to plunge into the pool of politics, not only as an interested citizen who will follow with some scrutiny the election campaign and choose the best candidate or, let’s say, the “less bad” candidate, but as an activist, who will do his best to convince people to do the same.

I’m taking a huge responsibility, a very important step in my life, to become a leader, a politician in my country.

Indeed it’s a huge responsibility, because people will trust you and give you the privilege to decide for their future, for their doom.

I’m not a lawyer, nor a politician by academic background. I have only my scientific background backed by some 14 years of experience in the field of quality and organization management, so I’m rather a man of commonsense, of ratios, goals, objectives, targets and road maps, than a man of great speeches. All that I need to complete my knowledge is training in international politics.

By my knowledge and experience as a quality manager I learned that to understand something, sure, you have to isolate it and to analyze it , but to have a global understanding, you have to go further than this reductionist approach. You have to consider things in their environment. It’s called the system approach or the holistic approach. This is the fifth principle for ISO 9001 the very well known quality management standard. Here I recall the saying of an ancient Chinese philosopher: “The whole is more than the sum of its parts.”

So to develop the adequate policy and to make the best decisions in politics, you must know and identify your situation: what are your strengths and weaknesses? what are your constraints? what are your limits? In other word, you must understand what’s going on in your country and where you can go; but the country is only a tiny part of the world and the influence of the outside as well as the environment is tremendously important.

One cannot pretend to ignore all other issues to focus on one isolated issue until its resolved, then moving to the next one. According to principle to which I referred earlier, it’s a very incomplete and inefficient way of dealing with a nation’s issues.

A true politician is that one who takes a holistic view in dealing with all issues, but in a global context, and when I say global, I’m speaking geographically also. He has to take into consideration what’s going on in the rest of the world, the experience of the greatest nations in democracy, in human rights, in technology, in financial systems, in the economy, etc.., I mean by experience, successes and failures.

The United States is a very young nation, but a very mighty one, where all people of different ethnicities, of different races, religions, exist in a pluralistic society and live together, very respectfully. They all love their country because it gave them a better life, thanks to democracy.

I believe it’s possible to adapt the successful American experience in democracy to Morocco, of course with respecting its particular culture.

My assertions here are personal convictions and points of views. I don’t pretend to have the right way or method to deal with politics, because as I said before, my knowledge is very limited in this field and I need to be more trained.

I believe a better life is possible in my country, for us and for the future generations, but only if people trust their government and help it by choosing people who will best represent the will of the nation.

Azzouz Oussi is a contributor to Morocco World News