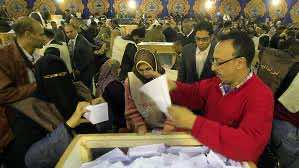 The results for the opening phase of Egypt’s first post-revolution election, delayed twice already, are to be published on Friday at 1800 GMT, state television announced.  Preliminary figures, which had originally been due on Wednesday evening, were pushed back by the election commission because of high turnout in the vote on Monday and Tuesday.

Millions of Egyptians embraced their new democratic freedoms in Cairo and second-city Alexandria earlier this week in an orderly and peaceful first phase of multi-stage parliamentary elections.

Early forecasts suggest the moderate Islamist Muslim Brotherhood movement is set to emerge as the biggest winner from the first round with over 40 percent, but with hardline Salafists showing surprisingly strong gains.