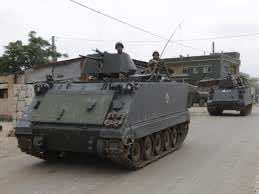 Syrian troops wounded a Lebanese woman when they opened fire on the northern border district of Wadi Kahled on Friday, an official said, as gunbattles raged across the frontier.

The woman was hurt by gunfire that came from a Syrian military post during an hour-long shootout, said Mahmud Khazaal, former mayor of the Lebanese border town of Muqaybli.

The gunfight had erupted shortly after Syrian refugees gathered at the Lebanese side of the Kabir river, which separates the two countries, said Khazaal.

The Syrian troops began to “shoot randomly” when the crowd amassed to protest a violent crackdown on the Syrian village of Tal Kalakh by forces loyal to embattled President Bashar al-Assad.

“Shelling and machinegun fire have targeted Tal Kalakh, which has been surrounded by armoured vehicles, since this morning,” said the Syrian Observatory for Human Rights.

The assault, which was launched on Wednesday, was being “conducted jointly by the Syrian army, security services and Shabiha” militias loyal to the regime, it said in a statement received by AFP.

Thousands of Syrians have fled Tal Kalakh and other border areas into Lebanon in recent months, as Assad’s troops fight to repress an eight-month uprising.