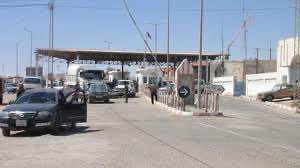 Tunisia on Friday closed the second main border post into Libya following attacks on Tunisians on the Libyan side, a security source said two days after the first closure.

The decision to close the Dehiba post “follows information of attacks on Tunisians in the Malout region of western Libya”, said the source, cited by the Tunisian TAP news agency. “Only Tunisians and Libyans returning home will be allowed to cross, until solutions are found with the Libyan authorities,” he added.

The Dehiba border crossing has become congested since the closure of the main checkpoint at Ras Jdir on the Mediterranean coast after armed and unarmed Libyan nationals threatened Tunisian border guards.

In one instance a Libyan shot and wounded a Tunisian customs official as he forced his way across the border.

The Ras Jdir crossing closed Wednesday after the Tunisians manning it stopped work in protest against the lack of protection.

On Thursday Tunis voiced its “deep concern” at the border incidents and called on Tripoli to manage its side of the crossing with “professional forces”.

Such incidents have led to lengthy delays at the Ras Jdir border, with the queue sometimes stretching for kilometres.

Millions of Libyans visit Tunisia to see relatives, many of whom fled the country before the collapse of Moamer Kadhafi’s regime.